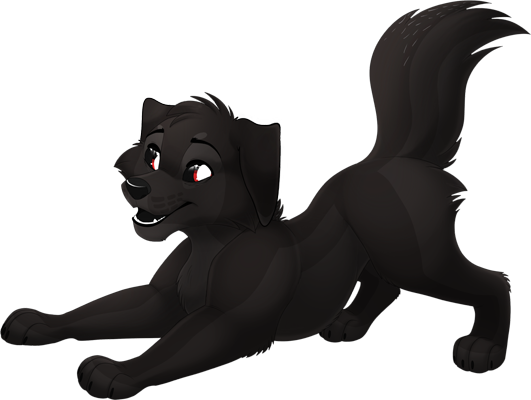 Xino is infected with Lycanthropy. Changes into a beastly monster after exposure to moonlight or especially frustrating board games. Howling at the moon relieves the symptoms for a little while, but use a Golden Apple for best results.

As you walk through the town, you notice a path leading further into the central island. Curious, you follow it, and come across a training grounds, where a black dog - no, on closer inspection, that is a church grim, not a dog - is sparring with a training dummy; leaping, kicking, and swinging his sword in his mouth to deal out damage, as he has no hands to hold equipment in. After a moment he notices you, and gives you a wary look, not entirely relaxing from his stance.

"You're just getting to know everyone? Alright...what do you want to know?"

"You wanna know where I'm from? Far from here."

"...So the others mentioned Ephemera, Morgan, Aava, and I, huh? Yeah, we're all...former dead or whatever. We were reborn here, but unlike Aava and Morgan, Ephemera and I weren’t born to parents or anything. For me, I rose again from the darkness while Ephemera just hatched from an egg, all alone. It was...surreal, feeling myself come together and then step out into the physical world again. It’s even weirder since as a church grim I don't even need to breathe anymore. Like, holy crap. Ephemera's odd that way too, since she can breathe underwater, though we’re not sure why she can. Running theory is that that shipwreck she hatched in was shipping experiments from Dragon's Maw Manor to who knows where. It sounds kind of ridiculous, but then again, ethics in Dragon's Maw Manor can vary. Widely. By village, even. It's...wild."

"Morgan can't breathe underwater though. He uses one of Sanuye's charms to get around that. Her people make them, and they're awesome, even if I don't need them in this life."

"What was I before? Well, Ephemera, Morgan, Aava, and I were human - though you'd know them as 'proto-furries'. It's crazy to know that here, humans are the stuff of ancient legend, where even their skeletal structure is the source of heated debate. It's...bizarre. Almost surreal. At least I can answer that question, having been human once."

"That being said, the fact that human skulls are a prized crafting commodity here is really disturbing. For you it would be like seeing a furry skull that was used to make something. Really not fun. I'd rather the Primordial Shifties have them, at least they won't make them into, into an armrest or something. Or Belphegor’s stupid candle holder! He keeps taunting me with it and saying it doesn’t matter cause I’m not human anymore but I am and I just wanna smash the thing against the ground! If he waves it in my face one more time then demon lord or not I will break the thing. And then give the poor ancient soul it belonged to a proper burial."

“Yeah. I was hit by a truck - some idiot thought speeding in a school zone was a great idea, and nailed me in the middle of the crosswalk. It...wasn’t quick, and I, the paramedics didn’t make it in time. I didn’t even see them. I just...died.”

“You can kind of see my scars, if you look closely. The fur is thinner and patchier in those areas. Uh, look at my left side and right knee, err, hind knee, you’ll see it.”

You follow his instructions, and after a moment, see what he was talking about. His knee looks like it’s scarred over from a mauling, while his side has a massive one over his ribs.

“Yeah. Can’t eat ribs for a reason. Just, no. Makes me wanna puke. A-anyway, did you wanna ask about something else? Cause I’m done talking about this.”

"Aava, Morgan, and Ephemera? Yeah, all four of us are close. They’re the only other ones who understand, you know? What this is like. It was...pretty rough in the beginning, coming to terms with this. With what happened. But I'm happy like this now. It's a second chance, you know? Ephemera, Aava, Morgan, and I, we all died young. So it's nice to be able to have another shot at living till we're old and- well, not gray, Ephemera already is gray and Morgan's silver is close enough haha. But you know what I mean. I'm hoping to make it there this time - all of us are."

"Other friends? Ohhh! I get what you're asking. Well, aside from the others in Ouroboros with me, which...took a lot of time, I have to admit I don't exactly...trust easily, and there's a reason for that. But I do have one friend outside the island. Her name’s Key, and she’s one of my best friends here. We've hit some rocky patches in our friendship along the way, some worse than others, but...we came out of that with our bond stronger than ever. I can't really even imagine my life without her now."

"My name? No, you’re right; this wasn’t my name in my past life. It’s an acronym, actually. As for what it stands for, and why I chose it in the first place, well..."

Xino just gives a little huff of a laugh, before shaking his head.

"That’s something I’m going to be taking back to the grave."

"Oh, my bun? This is Chizoba. He's been really great...he does his best to make sure I'm doing okay, especially when I'm having a panic attack or nightmares. I have chronic nightmares, they're...really bad. Chizoba's been amazing in that regard; he's like a tiny service animal. Or I guess Emotional Support Bun would be more accurate, haha."

"You...want to know why I became a warrior? It's...it's because I want to protect my home. I know I didn't have anything to do with it, and that it wasn’t my fault, but I still lost my old home, and everything with it. I don't want to lose this one too."

"Hobbies? Well, I like sparring. Racing with Faolan and Polaris is always fun too, but they’re fast. Ephemera, Morgan, Aava, and I like to go to the top of the little mountain in the middle of the island and just chill there. It's got a great view for watching the sunsets and the stars. I don't...it's nice to have friends you can trust, you know? It...took me a while, but...the people here, in Ouroboros, they've got my back. And I've got theirs."

“What? Pearling? Oh heck yeah, pearl diving is awesome! I mean, it’s not like there’s a magic trick to it - all the oysters look the same, and you’ve got no idea if they’ll have a pearl or not, but the surprise is honestly half the fun. I suppose if it were a job maybe that would be frustrating, but it’s not. I don’t know how Jörmungandr does it, but he almost just seems to know which oysters have pearls. He’s a lot better at finding them than we are, that’s for sure.”

Xino laughs, clearly entertained by this.

"Oh, Mateo? Yeah, I was able to feel him in the crystal he’d been sealed in. I had no idea what I was feeling, just that whoever was in there, they felt like a brother. And I had an older sister, in the life before. So the idea of a family member being trapped in there was..."

"Anyway. We got him out, that’s what matters. And he really has become almost like a brother to me. I’ve had so many questions about what I am, and these instincts within me...and now, I finally have the answers. Like why I can not only see but interact with ghosts, and how I can tell from a glance where they’re destined to go. I mean I had an idea about the first since, you know, church grim, but the second took me completely by surprise.”

"Why aren’t I the grim of our graveyard? Well, I’m still alive, soooo...can’t take up the graveyard watch when I’m not dead. It’s weird, I know. I don’t think something like this has ever happened before."

"It was nice meeting you, but I've got to get to the battlefields now. I was just warming up before heading off. So, I’ll see you around, maybe."

Xino gives you a small smile, before turning and trotting off away from town, toward the sea.