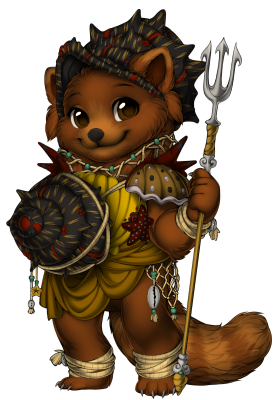 Sanuye is infected with Lycanthropy. Changes into a beastly monster after exposure to moonlight or especially frustrating board games. Howling at the moon relieves the symptoms for a little while, but use a Golden Apple for best results.

Walking along the beach, you see a brown red panda polishing her shell shield, dressed in loose silks and jingling shell armor, various shells and beads hanging loosely from rope netting interwoven with her clothing. The shell is unlike any kind of shell you’ve seen before, and you can’t help but wonder where she got it.

"Hello. What brings you here today?"

"Just visiting? I get that. Ouroboros is a neat place, isn’t it."

"Ah, a fine name. And yes, I share a name with Faolan‘s companion. What, have you never seen two people with the same name before?"

"My shell shield? Ah, you wouldn’t find it in any of the beaches here, or anywhere in the ocean depths. It comes from a particular crab monster in my homeland. It’s a desert, see, with villages built in various oasises found within the desert. It’s a harsh place, but it’s home."

"Yes, it was quite the adjustment living here. I’ve...never seen so much water in my life."

Sanuye looks vaguely uncomfortable for a moment, before shaking it off.

"At any rate, yes, I fight in the deep sea battlegrounds as well as the mainland ones, though I admit I am more comfortable there. But I am nothing if not adaptable. All of my people are; it’s a necessity, living in the desert as we do."

The red panda takes hold of one of the shells hanging from her outfit. Bringing it up for you to see, you realize that the tiny white cowrie actually seems to have light rippling gently over it, like light on the bottom of a pool.

"It’s a charm of water breathing. My people make them; we have for generations upon generations. There may not be many bodies of water in the traditional sense, but my homeland is prone to vicious flash floods during the rainy season. At least that’s what we call it, for all that it doesn’t rain much."

"Anyway, getting knocked off your feet by the rushing waters isn’t an uncommon occurrence. The floods are quite spontaneous, and take you by surprise more often than not. Hence the charms; there are enough dangers in the desert without adding the rather ironic risk of drowning to them."

"Huh? Oh no, my friend Kimeya is the one who knows how to make them, and he's quite happy to hand them out like candy. I mean, they're quite useful little things, aren’t they? Certainly much better than using and maintaining a diving suit, that’s for sure."

"Where is our homeland? It’s a great desert far to the west, known as the Red Desert, named for the color of the sand, beyond the borders of your known world. It was quite the journey, but well worth it. Living here has been wonderful."

"Why did I leave? Well, when villages grow too large for the surrounding resources to accommodate, they split in half, with one amicably departing in search of a new place to form a settlement. It’s known as the Wandering, and a rite of passage just about everyone goes through at least once, to broaden their horizons. There are exceptions, of course. The weak, sick, and elderly aren’t expected to move, for example. But there’s nothing stopping people from visiting family, or even moving back if they so desire. We’re a gentle people, for all that our homeland is harsh. But we can be just as harsh as the vicious desert winds in defense of our loved ones."

"Yes, Deneh here is a Red Desert native, just like I am. We use Dromedary Calves like her all the time for transport and mounts. She’s been a faithful companion and a great friend to me."

"What are my people called? Some outsiders refer to us as the Sand People or even as the Wanderers, though we call ourselves the Tribe of Red Sands."

"My hobbies? Well, I enjoy weaving, have since I was a little kid. There’s something nice about manipulating fibers in your paws into creations of your own, even if I'm nowhere near the abilities of tailors. Pikabolt and I have been trading tips and tricks, since our methods of weaving are entirely different, and Nocturne has been soaking everything up like a sponge. She didn't know how to weave before, you see. And while I don’t have the skill for it, watching the glassblowers back home at work has always been a marvel to me. They spin such delicate works of art, and the end results are beautiful to behold. I have a few, back in my house. Some from home, some from here in Furvilla, and others from Kimeya. It’s quite interesting to see the variations in style between them, from cultures and creators. Works of art indeed."

"Now if you'll excuse me, Zale and Genesis need me to pick up some things from them in the deep sea battlefields. Hopefully I'll still see you around when I get back."

And with that, the red panda takes up her spear and shield, and wades into the ocean. She doesn't come up again, presumably on her way to the battlefields just as she said. You can't help but wonder how long it took for her to get used to that.