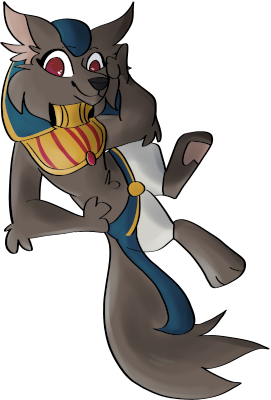 Taking a walk along the beach and enjoying the cool breeze in your fur, you come across a young jackal carefully building a sand castle in the...sand. On closer inspection, though, you realize that this isn't a castle, but rather a pyramid. Huh. It was a lot easier to build than a traditional sand castle, just an odd choice.

The jackal looks up at your approach, startled, before giving you a small smile.

"Hello. I haven't seen you around before. Are you new here?"

"Well, welcome to Ouroboros, traveler. You'll find it quite the peaceful place; well, when we're not being chaotic little gremlins, that is."

The jackal snickers to himself, and you get the feeling that you're missing something.

"Anyway, my name is Anubis, and this is one of my dearest companions, Keket. It's a pleasure to meet you."

Partially hidden behind the sand castle is a regal Egyptian sphynx cat. How you missed it the first time is beyond you, but she's a pretty striking pet. More importantly, though...

"Hmm? Yeah, I'm named after the Egyptian god of the dead. I mean...I look like an Anubis jackal, sooooo...my parents thought it was ironic. Father's high priest of Osiris looked like he wanted to strangle him though."

Anubis averts his eyes from your gaze, expression mournful, before returning his attention to you.

Anubis immediately raised a paw to cut you off.

"Just, hear me out. I promise I'll answer any questions when I'm done."

"Okay, so...a thousand years ago, there was a land called Egypt. It was a vast desert, ruled by a noble pharaoh and his priests. But, then a calamity struck. Strange new monsters never before seen emerged from the desert wastes, and with them came a mysterious plague struck the land, with the people infected just wasting away. The longer they had the illness, the more they were drained, until one day, they fell asleep and didn't wake up."

"Everyone was really worried. Mother, Father, and the priests prayed to the gods, and the various beasts of the gods joined in the fight. The nile flooded, washing beasts away; the sands howled and stripped the flesh from their bones. Crocodiles, jackals, falcons, they too lent their strength to the battle. But it was the wasting illness they carried that was destroying us, more than the monsters themselves were. The goddess Sekhmet was shielding us, but even the gods could only do so much."

"Father knew we were losing, and didn't want the blood of the pharaohs extinguished. So he prayed to Horus for guidance, and the god answered."

"Horus told Mother and Father that I needed to be sealed away, with the successors to the current high priests. The ones who would become my court. If they failed and Egypt fell, the nation could be renewed when the dust settled, and the plague died out. Renewed under my rule."

"I didn't...I didn't want to do it. Didn't want to lose my parents, or the high priests - those who had been like aunts and uncles to me. But, I had a duty to Egypt. We all did. So, a small chamber was carved out of the rock in a canyon, and my friends and I were led inside. Sarcophagi carved with runes and humming with magic awaited us, and one by one, we got in. The last thing I saw was my Father's face as he put Keket on my chest, before he placed the lid on my sarcophagus and the sealing sleep took me."

Anubis wiped a tear from his eye, the memory clearly distressing him.

"We expected to wake in ten, maybe twenty years. Enough time for the disease to die among the sands, leaving the monsters vulnerable, if they even survived the wrath of the gods for this. But when I woke...there was an archeologist in front of me. Zihao. And, and the sarcophagi that held my friends, they were...they were broken. All of them save one. The one that held Amun, the now high priest of Thoth."

"I didn't sleep for a decade or two. I slept for a thousand years. Egypt was gone, the desert sands replaced by forests vibrant and cursed alike. The ocean had crept so much farther inland, shrinking the land I once knew. A-and...and that was it. My nation was gone. All of our other friends were gone - mine and Amun's were the only sealing chambers that held through the ages."

"And...that was it. Egypt is gone. There is no nation for us to resurrect. And even if we could, all of the old ways have been mostly forgotten. There are still a few who worship the gods, but not many. And lack of belief has crippled them."

Anubis looks at you with a serious expression on his face.

"It's like that with all deities. Worship and belief is what gives them power. Without that...their powers dwindle, and if they become truly forgotten, when the last person turns away, then they fade. Gone, forever."

"So that's my story. Zihao took Amun, Keket, and I back to Ouroboros, and gave us a place to stay. I can't express my gratitude enough. Living at sea has been...a really surreal experience, but Sanuye and Kimeya have been a great help to us. They come from a desert nation too, so it's been nice to have someone familiar with the lifestyle with us."

After a moment of thought, you decide to redirect the conversation to more peaceful things.

"My hobbies? I mean, I like animals, especially cats. Like Keket! They're sacred creatures, and deserve to be treated with respect. But being with all the animals in Tienyo's pasture is just crazy. There's so many different kinds, much more than the desert animals of Egypt Amun and I know. Animals from the seas, skies, mountains, and forests alike...I don't think I could ever get used to it. There's so much more variety in, well, everything now."

"I also really love gaming. I used to play board games all the time, and I still do, but now there's computers and switches and it's just insane, you know? The sheer variety and beauty they can create. I mean, have you seen- no wait, of course you have, you live and breathe this kind of thing. Amun says I'm gonna get addicted but he's just as fascinated by it all too! We’re a part of the gaming group that meets up every week to play things like Minecraft, MarioKart, Wii Sports, Smash, and Mario Party- and I’ve only broken the- uh...”

"We've...yeah, we’ve broken things before. We've gotten better! I haven't broken anything in six months! It just takes a while to figure out how things like the microwave work, okay? And I only broke the controller playing Smash once!"

"Who are we living with? Oh, Zihao. We're pretty much walking, talking windows to the past, and he's been having the time of his life making sure our time isn't forgotten. It's really nice; Amun especially has been eager to help, being a priest of Thoth and all. But more importantly, Zihao cares about us as people. He's been really patient and kind helping us adjust to the modern world. Including all the new foods!”

Anubis beams at you.

“There’s so many different foodstuffs here, cause you can get em from all over instead of just Egypt. Zihao was pretty surprised to know we had watermelon back in Egypt - which are super good, by the way - but then he had us try maple syrup and ohhhhhh is it so good.”

“Barbecues are amazing too. I mean, don't get me wrong, we had all kinds of exotic foods at feasts. But never in my sixteen years in Egypt did I taste anything like the grilled meats of a barbecue. Absolute heaven on my tongue. But even better than barbecues are these little nuts that come from Olde Foxbury, they’re called pecans and they’re the food of the gods. Then there’s whipped cream, that stuff is a delight and a weapon both!”

"But enough about that. You’re not here to hear me enthuse about the incredible variety of the modern world.”

“How are we dealing with losing everyone? Well, it hurt, a lot, and sometimes I just wanted to crawl back into the coffin - maybe would have, if Amun hadn’t been there. We leaned on each other, helped pick up the broken pieces so we could heal. Then Shiloh moved in, and he’s been a blessing from Ra himself. Anubis - the god of the dead, not me - has been more than willing to turn a blind eye to messages Shiloh passes between Amun and I and the rest of our court, as well as when we reunite on the day of the dead. Showing them all the amazing things in the time Amun and I live in now has really been a treat. I'm glad that we still get to see them, even though they're gone."

"I know Ronan's deity isn't so supportive of this kind of thing..."

A strange, lilting whistle rings through the air, soon joined by another voice, and then more others. A peaceful look settles on Anubis's face, and he gets to his feet, brushing sand off his pants.

"That's the welcome-home song. Or song of the night. I dunno what exactly, I don't think it really has a name. But, it's what calls everyone home. So it's time for me to take my leave. Safe travels, alright? Farewell."

And with that, Anubis lifts his head and adds his voice to the song, stepping through the sands as he approaches the town proper. You watch him go, mind full of questions and few answers.

This town really is a strange place, for all it appears otherwise.