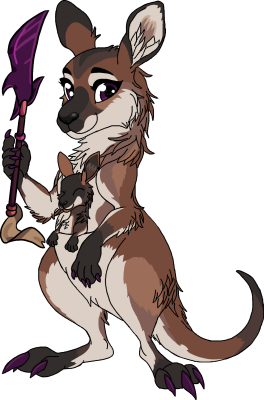 Allegra and Ricky is infected with Lycanthropy. Changes into a beastly monster after exposure to moonlight or especially frustrating board games. Howling at the moon relieves the symptoms for a little while, but use a Golden Apple for best results.

Name: Ricky
Age: 6
Career: None
Favorite Color(s): red
Likes: candy, being given piggyback rides, sleeping in his mom's pouch, colored milk, and merry-go-rounds
Dislikes: foul smells, nausea, cleaning his room, the Naughty Corner, and creepy crawlies
Favorite Food: Bubbling Brew
Hated Food: Winter Salad
Other: Herbivore, Toyhouse
The ring of a sharpening stone on metal catches your attention, and you turn to see a wallaby sitting on the stairs, sharpening her glaive while keeping an eye on the joey who is clearly her son, playing with a little toy shortsword in the yard. She looks up at your approach and gives you a smile.

"Oh, hello. Are you a visitor here? I don't know your scent."

Your scent? You ask the obvious question, and Allegra nods.

"Yes. An incredibly strong sense of smell runs in the family, along with a darkness alignment. Hence our eyes and claws, and my weapon of choice."

Allegra raises the glaive in question, before setting it back down again.

"Oh, where are my manners. I'm Allegra, and this is my son, Ricky."

Said joey looks up from his play.

Curiosity satisfied, the joey loses all interest in you and goes back to whacking a dummy monster with his sword, shouting out sound effects and cute little battle cries as he does so.

"What am I talking about? My family's darkness alignment manifests in our eyes and claws, as you can see from the color."

Allegra taps her face just under her eye.

"It's both a boon and a drawback in battle. But I can tell by scent what a monster's weaknesses and resistances are, and I'm training my son to do the same."

Allegra gives you a wry smile as Ricky looks up excitedly.

"Yeah! Momma takes me in'er pouch and I getta watch her go smack down all the monsters and stuff! They kinda smell icky and way different from the ones in Quet'al Palace where we used ta live but I'm getting better! I can tell which ones hate darkness and which ones don't now!"

"I know what you're thinking. 'What kind of mother takes her son into battle?' But it's an important part of my family's way of life. We have to know what monsters are weak to our strengths and which ones aren't at the very least. It may seem harsh, especially in today's world, but it's an important life skill nonetheless. Better safe than sorry, we always say."

Allegra gives you a serious look.

"And if you think I‘d let a hair on my son's head be harmed, you've got another thing coming."

The wallaby waits, seeing if you understand, before nodding her head in satisfaction.

"Good. Now that that's out of the way...was there anything else you wanted? You smell like you know your way around the place."

"Oh yes, I can smell that. I can smell emotions, resistances, who or what you've been around, and more. To be fair, most my family can't go that far, but some of us have honed our sense of smell beyond what even bloodhounds can pick up. And I'm teaching my son to do the same."

Allegra looks over at Ricky, who has long since returned to his play. Now he's shouting something about retribution as he beats the stuffing out of the dummy monster.

The joey giggles, before going back to his play.

"Ricky hates bugs. He's quite the little bloodhound himself when it comes to sniffing them out. And then squishing them with his practice sword."

"What I like to do in my spare time? Well, aside from sparring, I do enjoy going to the movies. Popcorn's my favorite snack, even if little Ricky tends to get it everywhere. Ground in the carpet, back behind the couch cushions..."

"The joys of having a young child."

Allegra suddenly looks up, glancing over toward the sea.

"That'll be Xino coming back. He's got a unique scent even for a grim. Ricky! We're heading out!"

Allegra gets to her feet as Ricky hops over to set his toy shortsword in a rack against the side of the house. He happily takes a nosedive into his mother's pouch, and she picks up her glaive as he gets settled.

"We're running dry on some particular monster parts that come from the sea, so we're on a running rotation for the moment. And don't worry, we both have water breathing charms from Kimeya. Expensive though they may be to make, and thus commission, they're worth every furcoin."

Ricky pokes his head out of his mother's pouch.

Allegra just chuckles, before giving you a wave. She turns and hops off toward the sea, her long legs eating up the ground with every bounce. Soon, the pair have disappeared down the road, leaving you alone. Time to poke around in another place on the island. Maybe see how bad your wallet will hate you if you commission one of the water breathing charms the villagers of Ouroboros seem to love so much? Time to find out.