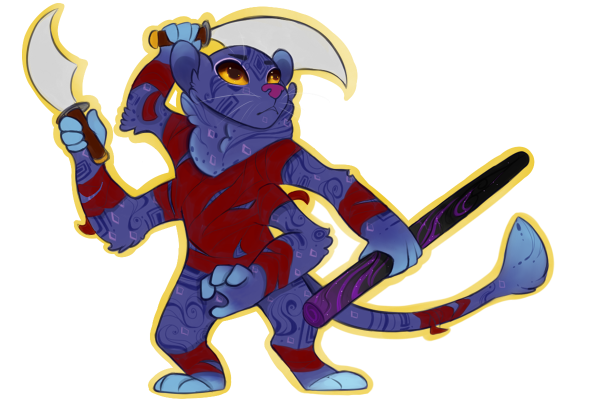 //
Unlike the rest of the warped Realm, this place didn't resemble what lay in the Nature Realm; where it was ocean, there was a flat plateau here, made completely of the blackened smooth stone, not unlike polished obsidian. The stone reflected little light, though no mists obscured the plateau, and here, the sky could be clearly seen. To the east and west, the sky was scaled in beautiful hues of violet, periwinkle, and deep, rich blues, though throughout the scene was jagged tears of lightless black. Directly above, and spanning north to south, was the color of a dark creamy brown, and its texture was soft, almost fuzzy. Yet, as was with the scales, it was torn through in areas by the cruel black, and from fresher wounds the violet energy seeped through, spilling onto the land, adding more mists and obscurity. Here, too, where the sky was clearest, could a kind of pulse be felt, gentle, struggling. A feeling of deep anguish presided over it, and as a black scar grew wider or developed, the sky would shudder, the pulse becoming a flicker, fearful, tormented.

Shalassa let her gaze rove across the gathered beings, not speaking, letting the Heart of the dying Realm become clear to them. As she rose, her voice rang out clearly, commandingly, brooking no interruptions from the subdued crowd.

"Ye are here because Nature has become careless in tending to Her children. Lost, ye have been sought by this, the Guide, the God, of this place. The only remnant to not have been destroyed by the Gazeless, one of the only remaining beings not lost within the Void. Before ye, circling her precious Realm and her remaining, and new children, is the great faerie Lorue."

"What ye feel now is her struggle, the pain she has endured for many lifetimes, spanning centuries. Desperate, she has clung to life, in the hope that one day she will regain her rightful place amongst the other Realms, that she, and we, will be remembered."

"I speak to ye now as Shalassa, the last Rune Priest of the Arcane, known as a Magi."
//
Shalassa is an astral shifter with a clear objective in her mind; to restore what was long ago lost, wiped from memory, and faded into the obscurity of the Void. While not in their Astral Phoenix form, Shalassa takes on the appearance of a Rakshasa, their fur being deep blue. and fading to a faint periwinkle on the ends. Her body is scarred across with gleaming sapphire and lavender tattoos in intricate patterns, lining down her paws, chest, legs, and head. They have four arms; the left two of which wield a pair of light scimitars, whilst their right paws take control of her long, obsidian staff, which has veins of amethyst crystal throughout it.

Shalassa has since discovered hope of restoring her beloved Arcane Realm, and to ease the suffering of their God. They range all the lands of the furs, seeking those who have been tainted by the straying arcane magic, to give them a home and to make them realize their destiny. To train, to gather, and to unite into one force, who will destroy the barrier the Gazeless had since put in place. She has yet to come to Quetzal Palace, as its source of angelic magic makes them certain that finding those lost within the Arcane are few and far between--and for other reasons, yet to be seen.

((This is all from an original universe that I've created, known as Prian. If you have any questions about it, feel free to ask! Also, I'm usually pretty open to rp, and all this about Prian is simply used as reference to show that there is something I'm pulling from. You don't have to know anything about it if you want to rp with me, I'll accommodate for anything ^v^ it's all for fun!))
*Note: Pronouns are she/they. Tends to default to female, as like with many astral shifters, they are the caretaker of some part of the known universe.

<<Sketch by the Quick Sketch faerie!! <3 >>
<<Paintie by @Egglantine and you can find her artwork here! >