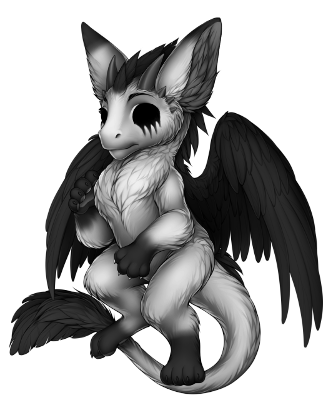 Lost Soul is quiet and tends to distance himself from others most of the time, as nobody really associates with him anyway. Before he came to live in his current home, he would live alone in a dark forest, tricking both humans and animals into following him deeper into the forest. Anyone who followed him was never seen again, and were all presumed to be dead after they were not seen for a long time. It was never known if he killed them, but even now, he'll try to turn on the others of his home. He is always stopped by the more protective residents, but that never stops him from trying. He remains quiet with an always-stoic look on his face. His eyes are nothing but black holes, so it is impossible to know exactly what he is feeling. The other animals in the area where he lives are afraid of him because of where he comes from and the stories of what he used to be. All other relatives, if any, are presumed to have been either killed or have abandoned him. It was unknown if he was born looking like he does or not. The only time that he ever speaks is when he is seemingly trying to lure others into following him to who-knows-where.

He tends to occupy the rest of his time going around to find various seeds and other items with his little black wuff along-side him, which is the only creature he seems to have taken a liking to.

With the arrival of Elizabeth, Lost Soul has toned down on bothering the other villagers and others he may come across, mostly because whenever he goes out, she tends to catch him and go with him. He can't figure out why (or find any specific time to get rid of her) but he eventually just decided to just roll with it and accept the fact that she wasn't going to go anywhere.

((Lost Soul actually recently SEEMED to show some sort of emotion when Vampy decided to take a trip over to the Quetzel Palace because well... how can he hide out in a dark forest when there IS no forest... only clouds... He sent an emotionless face at Vampy that practically screamed a glare! Don't worry Lost Soul we'll be back in Dragonsmaw as soon as I have a hoard of plants :X So hop to it mah boy! :D))