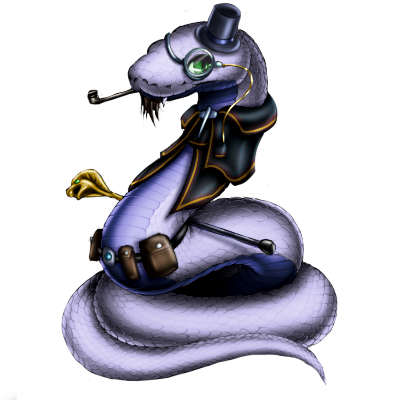 " I say, Dragonsmaw manor is such an exciting place to live! Monsters! Beasts! Peculiar species of all sorts and shapes! How marvelous! "
-Snektar Von Slithersteen-

Snektar Von Slithersteen, however, did not listen to such talk. He now slithers about, with his monocle, cobra cane, top hat and cape and his trusty belt-o-goods. He is well-mannered, polite and poised. Spending his time in the wild, he collects all sorts of treasures to bring back to the town. Truly, he is a gentlesnake explorer of the highest class!

No one actually knows, however, where he came from. He simply settled down one day and has since then been seen slithering about the town and it's outskirts, every now and then actually using his cane to... "walk". Unconventional or not, no one can deny he has a certain class the way he moves!

Snektar has gathered to him a small group of close friends. First of them is the talented blacksmith that goes with an unusual name, Mr.Shinyscales Jr. Snektar helps him with finances and provides the materials used in the forge.

The second is the energetic fellow explorer, Kheg. Snektar is one of the few who tolerate Kheg's extremely energetic and somewhat annoyingly outgoing personality. Snektar considers him a splendid fellow, however. Just a very obnoxious one.

The third is Lady Faralyn, a high-born dragoness turned warrior because that is what she wanted to be and that is what she became. Exploring is easy and safe with Faralyn around; just follow the trail of monster carcasses! Even so, Snektar considers Faralyn a lady of the highest class. This used to annoy Faralyn, but nowadays she demands being called "lady", which suits Snektar just fine.

Fourth, there is the kobold, Margador , who leaves even more monster carcasses around! Even if this particular kobold once was a thief and even managed to steal Snektar's purse a time or two. He has since forgiven the poor kobold for their past actions, and given the small warrior a second chance. And it has proven to be quite fruitful.

Fifth, there is Mazjka , a very friendly, outgoing bear who happens to have some sort of adventures during nightime. Sometimes, he provides her with a place to sleep after her adventures. Mazjka herself apparently remembers nothing of her nightly walks, but Snektar helps her sell all the stuff she somehow manages to gather during these.

With his merry band, Snektar also takes care of the stall and sells items of value, such as the ones he finds with Kheg and Mazjka, Faralyn and Margador brings as loot or Mr.Shinyscales Jr. forges. Small as their group is, Snektar has managed to bring the very best out of his friends and with his financial prowess has kept everyone secure in terms of income.