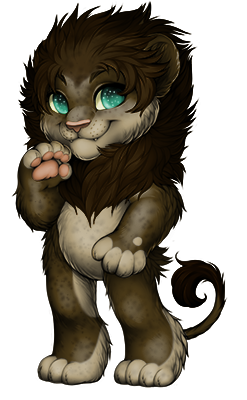 About a year from when he would normally leave his pride Kipofu left early. He couldn’t take the teasing from the other cubs born that year, the noises of irritation from the adults when he accidentally got in their way. So, he left.

He wandered for a few weeks, only managing to hunt lizards or the occasional rodent. Things weren’t looking good for him, he was ill, his mane was a mess, he smelt terrible.

He would’ve probably died if he hadn’t met another young lioness, Mgeni (Owned by HeadphoneLion ) whom had left her own pride. She was a well muscled strong lioness. Kipofu was of course weary and their meeting was rather tense as she had just suffered great loss of her own and wasn’t the most welcoming.

She soon realized the state that Kipofu was in and she seemed to soften, she went out and hunted for the both of them while Kip had just sat somewhere sulking about how he could’ve done it himself. He hated admitting his weakness and that he couldn’t fend for himself, not as easily at least.
He had cautiously shared the meal with her and soon fell asleep with his contentedly full belly.

and their relationship with each other flourished, he became more trusting of her and she did of him.

Years passed and their relationship with each other flourished, he became more trusting of her and she did of him. They stayed by each others sides. With her encouragement Kipofu had focused more on being more aware, better at focusing on his surroundings, and, it worked. Slowly but surely Kipofu became better at hunting, even knowing where the ground dipped in front of him.

If you were to meet him today, it would only be the fact that he can’t look you in the eye very well that may give away his blindness.