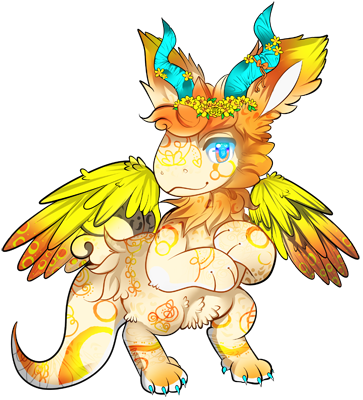 Fwirl is so far an independent Lumey, living in the forested woods nearby the village. They've not yet come into contact with any of the villagers with the exception of Chimer, who is known to frequent the woods in search of those who are lost. Curious but gentle, she wanders around, happily harvesting the nuts, seeds, and the occasional fruit from the woods.

Fwirl hadn't always lived within the palace's cloudy terraces, but a fierce gale blew him off-track when she had been in flight, and she awoke in the sky. At least, that's what they can recall, to the best of their ability; everything else prior she can't properly remember. Coming to, he found, scattered about, a plethora of flower petals. laying limply on the ground. He gathered them, immediately growing attached to their vibrant hues, fascinated by the splash of color they gave the otherwise pale and washed out hills of Quetzal. And, speaking of those hills--the clouds--none presented themselves as anything sharp enough for her to rid herself of her wool, and so this established itself foremost in their mind. They set out, taking the flower petals with him, keeping to herself. He hadn't stumbled upon much other life--certainly nothing intelligent--when they finally found the woods. As expected, "forests" in Queztal Palace are a bit different than in the lands below; actually, it's only the tops of the tallest trees which pierce through the cloud layer, and reach yet higher into the sky, making such a wooded area, devoid of roots and other shrubbery. What it did not lack, thankfully, was fallen meteorites, with jagged edges enough for them to rub off the wool! And so, he began to make these woods, which were rather close to the edges of the Palace's lands, her home, and grew familiar with them. Alas, however, she's had to say goodbye to some of her flower petals, as they withered away, but they've served to keep her fascinated with flowers. She now tends to any flying daffodils she can find, using only a few of their petals, and maybe the occasional flower itself from a field, to add to himself. He often will lay among the flowers, listening to the swish and flutter of them in the wind, humming along to the droning of the Monarch Flions as they buzz past. They have seen the other flower varieties, but the cheerful hue of the daffodils have captured their heart.

It was actually a while until she came across Chimer--though, really, it was his chimes which drew her attention. There was another blustery night, and he was growing concerned--with every storm that passes through, the lands of Quetzal shift and shudder, the clouds being moved by the winds, sometimes opening up to perilous drops to the land below, or creating vast hills, or winding caverns. It was just as they were becoming convinced they were lost, when he heard a sound she'd never heard before; echoing, calling, but more ethereal and prolonged than birdsong. Overcome with curiosity, and certain he couldn't get any more lost than she was, they made their way over to the source of the sound, pausing every now and then to huddle down from a sharp gust. Every time she paused, the sounds would get more frantic, and, panicking himself, they would reply in high-pitched calls, as if in imitation.

When he arrived at the source, she was amazed at what it was; a set of metal tubes strung together, and hanging from a wooden, fur-made structure. Beyond them, shifting in the haze of clouds, were the dim lights of a village. Hesitant to approach, and content to simply experiment with the chimes, they remained where they were, playfully nudging the chimes when they grew quiet, and chirping back when they sang out.

The storm blew past, and he rose, gazing about. She had the feeling she wasn't alone, and that she shouldn't take these chimes, as much as they wanted to. And so, leaving a flower as thanks,she retreated back to the forest, getting re-accustomed to the new layout.

In truth, Fwirl returned often to the chimes, so long as they were alone. She began to pay closer attention to their pitches, realizing repeating tunes they would sing out, and began to reply, testing the limits of his own voice, and adding it to theirs. He also saw the likely owner of the chimes, once, but the two had yet to come into any direct contact. Perhaps a glance, then one or both would scurry away, feeling they were intruding upon one another. They desperately want to confront this beast though, because she could've sworn that he's also sung with the chimes, and carries the same respect and admiration for them that she does. And, truthfully, they're feeling very lonely...

Though they are yet unaware, she has slight control over the wind, and this would assist him to 'glide' every now and then (over extremely short distances! Really, he used it to float for a few seconds to show off), or to make her body lighter so she could run faster. Though, he mostly used this talent to control and collect flower petals, crafting them into intricate 3D patterns and shapes, and as a method of communication; using them as drawings, spelling out words. This latter method she's becoming reacquainted with, and doesn't have any desire to experiment further with their powers, as there's no need to.

She has little desire, if any, to fight. If she is ever near any danger, the wind will seem to call him elsewhere, luring them out of harm's way.

*They use they/he/her as pronouns, and have no real preference! Also, my apologies if it gets confusing as I transitioned so much, I'm learning how to properly write for a genderfluid charrie who's accepting of multiple pronouns. If you have any tips, please let me know, I'd love to learn ;o;

((Lumeys are a species owned by Hatty and I claim no ownership! If you want to know more about Lumeys, go see her thread about them, where there's all you could want to know about Lumeys! Hatty is the designer of this Lumey, I did no art here, only a bio. And many thanks to Hatty for their design and allowance for me to make a bio!))