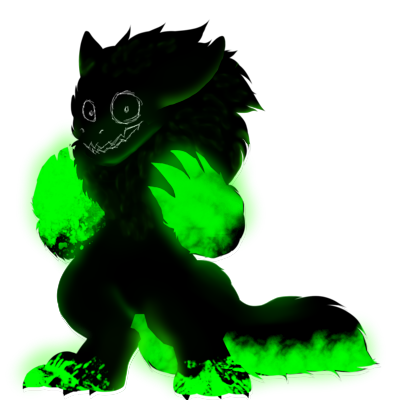 "What do you mean you've lost it?"

"It's gone - it's no longer in the containment unit."

"Do you have any idea where it could be?"

"You do realize that if this place goes dark, nobody will make it out!?"

"So.. you're saying that if this place loses power, we're all doomed?"

"For most of us, yes. But from what we've observed, even after tearing up all the prey we've given it, it likes to keep some of the prey alive."

"And what does it do to the stuff it keeps alive?"

"Are you braindead? Have you even been paying the slightest attention to all the stuff we've told out workers about this creature? When it attacks, it's never alone. It stitches the bodies of those left alive together so they can attack things for it. It's bad enough that there's already nothing known to stop it-if the lights go out, and that thing escapes from here. it's not just that thing that they'll have to worry about."

"Are you sure you want to do this? You have no idea what we might find here."

"You offered to come. If you're uncomfortable with returning here, you can always go back to the village. I'm not forcing you to stay-I know this place brings up some bad memories."

"No no, it's not that. You were able to save me before things could get ugly. What worries me is how Zira described his reaction to the place. She said he was completely fine with roaming around the top and main floors, but completely avoided the wing that contained the staircase that led downstairs. Even though it was mostly blocked off, he avoided it like the plague, and forbade them from ever going down there. Who knows what could've frightened him so badly?"

"Exactly. If Sightmare fears whatever is down there so badly, then we might be able to use whatever it is to defeat him once and for all."

"And if it is hostile towards us?"

"If whatever is down there proves too great of a threat for us to make piece with, then we'll leave this place as is and never return."


*the walking continues with idle chatter that carries no importance*


"Status update: We have just entered the wing which contains the staircase that leads downstairs into the forbidden basement. The tip we received from Zira, the former wife of Sightmare, has proven to be correct. The parts of the staircase leading upwards is completely unblocked, but going further below the main floor there are massive piles of debris piles of debris blocking the way to the basement. Everything is filthy, as if it hasn't been touched for years."

"How would we do that? There's only one way in to the basement-it was obviously built to keep something in, why would there be another exit?"

"Sightmare had given Zira a complete tour of the building, despite this place being huge. She recounted seeing about fifty seven doors in total, not counting the entrance to the basement. A few days ago, I looked around and only counted fifty six."

"There's a hidden door, with no fancy keypads or anything, but definitely hidden away from the average eye. Spirits and creatures of the ethereal plane are good at finding secrets-I guess they never expected a creature like Zira to go snooping around in the dark corners of an abandoned laboratory."

"This just keeps getting better and better."


*more walking for an extended period of time*


"Status update: We have found the door that presumably leads to the basement. It is as Zira described it, with no locks, keypads, or anything to keep a sentient being from getting through. Printed on the door are large, faded letters that read 'Prohibited: Emergency Exit, Use Only In Extreme Circumstances'. By knocking on the door, one can tell it is very thick in width, made of strong metal. There is only a latch with a button-I assume all one would have to do to open the door is press the button, push the latch in and then lift it up. Obviously made for quick escape."

"Are you sure this is the door?"


*there is the squeak of a rusty hinge and a click, and then a large scraping sound-any new sounds made echo greatly*


"Ugh, that smell! It's so warm and musty in there, and it smells like decay!"

"Status update: I have managed to open the door. It seems the actual door is very skinny and lightweight. But upon pressing the button, a large metal wall behind the door was moved aside. Undoubtedly, this was made to prevent any unsatisfactory creatures from escaping, for this was only made for those smart enough to know to press the button to open the door."

"I think I'm going to vomit if I take a step further."

"Same for me, but I can't just leave this now. I'm going in, with or without you."


*the silence resumes, with one pair of footsteps entering the uncovered space-soon, another one follows after*


"Status update: Everything in here is extremely high-tech. Most of the stuff here is either destroyed or covered in a layer of dust, rust or filth, but it obviously cost a lot back when it was in mind condition. The technology and appliances down here are more advanced than everything else upstairs, so it is safe to assume the scientists took on more daunting tasks down here."

"I don't know about you, but I'm pretty sure that something really bad must've had to have happened for them to leave all this stuff behind."

"I feel the same. The further we get in here, the worse things we might-... see."

"A pretty major artery must have had to been slashed open for that much blood to be on the walls. And look at that smear! Only something strong would drag a body along the wall as if it were a mere play-thing."

"That rotting smell is getting stronger..."

"Yeah, I can tell. Do you think that we'll find-hold on, did you hear that?"

"Shh, be quiet.... we're being followed. Whoever you are, show yourself!"


*silence follows after the voice echoes throughout the building, and then slow pawsteps approach*

"Um, status update: We are being approached by a creature. It appears to be a skunk of some sort. It has a couple different fur colors, which all appear to be... stitched together. It has different colored eyes, snagged teeth, tattered clothes... it's an amalgamation of parts. I don't yet know if it's hostile or not."

"O-oh gosh... The creature appears to be repeatedly pressing on its chest with a paw. Not only does blood bubble up from in between the stitches, and run from the mouth when it speaks, it's also comeing out from the fur... like it's soaked in blood..."


*a loud roar is heard from somewhere nearby*

"Head back to the door and get it open as fast as you can. No matter how broken it might be, I'm not leaving this poor creature behind."


*one pair of footsteps runs away, while another approaches the heavily breathing skunk*


"Take my paw, and hold on tight-I'm getting you out of here."


*there is a loud crash and then a shriek from the creature that had roared, now much closer*


*the sound of frantic running commences*


"Status update! I have found a sentient lifeform within the basement, and we are being chased by a giant black monster that is oozing green liquid, sand it's picking up speed! I feel as if this is the monster which got the whole basement sealed off!"

"WHY ARE Y-YOU STILL N-NARRATING?!"

"THIS ISN'T A CAMERA! IF WE DIE, AND ALL THEY HEAR FROM THE TAPE RECORDER ARE SCREAMS AND ROARS, THEY'LL NEVER KNOW WHAT THEY'RE UP AGAINST! NOW GET READY TO CLOSE THAT DOOR!"


*there is another roar much closer this time, and then the squeaking of hinges and latches shutting in place, and then finally-only a second after-a loud crash and an angry but hurt groan*


*there is only panting for about a minute*

"Hey, we made it out alive and unscathed, and that's all that matters. Plus, we collected a living specimen. If they really are one of the scientists that never made it out, then we are in the possession of some valuable information."

"Dude, the skunk-thing seems to be out cold.... Is it even still breathing?"

"Yeah, don't worry. He's probably in shock from all the excitement, I'll have Fern look at him. Ha, imagine how surprised she'll be!"

"Alright then, if you say so. But Rain, don't you think we should get going now?"

"Yeah, you're right, just let me make one status update. Ahem, status update: Silver and I journeyed to an abandoned laboratory, the one Sightmare used to live in, in hopes of finding out why it was abandoned. We learned that Sightmare forbade anyone from going in the basement, and while the main entrance was blocked, there was another secret exit. We entered it, despite not knowing the carnage we would find. While inside, we found broken equipment galore and blood stains covering almost every wall the further we went in. Eventually, we saw a creature that I assume to be a stitched up amalgamation of a few of the missing scientists. We were attacked by the monster that caused this whole mess, but because it couldn't get through the escape door, we were able to escape. That's all for now-Rain, over and out."


Nobody knows what they are. A monster, demon, god, it doesn't matter. All that matters it never gets out. Although, that certainly doesn't stop it from trying. It calls to other beings in a sing-song voice, however you can never be sure if it is singing at all. It speaks in rhymes that hardly make sense, though if you were ever to meet it in real life, you would only hear drawn-out screeches and roars that could hardly be determined as words. It is unknown if it eats or drinks, or if it just takes a long time to consume things and is good at storing energy, for it has been trapped for sOo lONG-. In fact, virtually nothing NoTHiNg is known about this creature, things like what it's made of, how it thinks, even it's origin is uNKoWn. All anyone knows is that it's evil, a monster fAIlEd EXpIrImEnT that only wants to EscApE!!! Let's just hope that such a tragedy never happens.