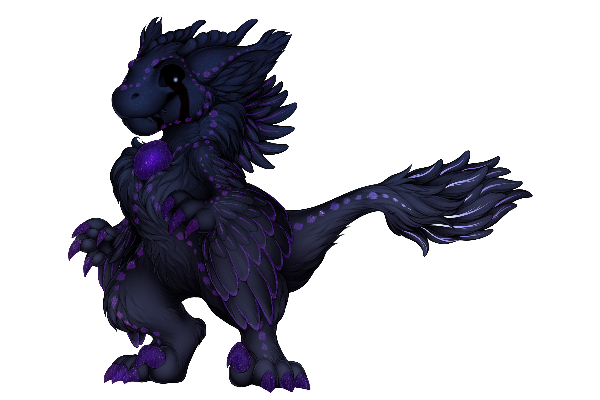 Shadows loomed up out of the rubble of the city as you walked by, an eerie silence building in your ears. You start at every little sound, from the dripping of water, to the falling of the occasional stone displaced by your feet. A roar echoes behind you, and you scream, confused. Something dashes by you, and you fall to the ground, tripping over your own feet as you try to comprehend what was going on. There was a monster. A giant, shadowy monster, with razor sharp teeth and- wait. No, this was just a normal Gem Raptor. Though... maybe not so normal. It was twice as big as the average Gem Raptor you saw roaming around your own village, and it had a very different color pattern than any you had ever heard of before. It opens its mouth, and you expect a groundshaking screech or bellow to come out, but it just says, "Heya stranger! What're you doing around here? Don't you know about the Monster that lives here?" It tilts its head, awaiting a reply. "Wait, that's why you came here? To see the monster???" It strikes a dramatic pose, one wing raised over its head, and another outstretched behind it, tail arched imperially. "Well look no further! For here she stands, Queen Azrael of the-" A rock bounces off her head as she whips around, looking for the source of the rock. An orange chested bird lands on her shoulder, chirping indignantly at her. "AH!" She yells, and raises a claw. You lunge forward to stop her from beheading the poor creature, but she only pats its head softly. "I was looking all over for you Azazeru!!" She pouts as the bird chirps even more indignantly. "What do you mean I'm not a Queen? I am too! I even took that crown thingy from that other one!" She plunges a wing into the ground, pulling out a silver crown in her claws. "SEEEEE????" 'Azazeru' chirps in defeat, and affectionately nuzzles her shoulder, before taking off and heading away from the two of you. Azrael looks back at you. "I gotta go! Bye friend!" She rushes off, calling after Azazeru, who looks back and only flies faster. You aren't sure what just happened, but it sure didn't seem normal.