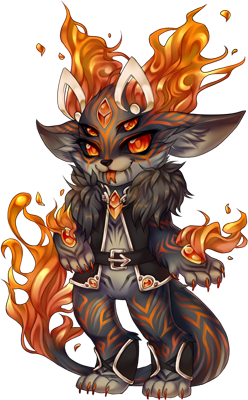 Ifrit is the other representative of the Dark school of magic from his coven.

Dabbling in the supernatural, Ifrit began to mold himself in its image, twisted by the powerful creatures and beings it saw.

He poured over any form of grimoire or tome of these things, obsessively devouring any lore, ritual, spell, anything he could get his paws on. He peered too deep, though, fell too far into the rabbit hole. His mind is corrupted, addled by those unspeakable monstrosities that defy all meaning and words.

Part of a coven of seven, Including Five. Kuu, Izanami, Izanagi, Zephyr, and Ichor.