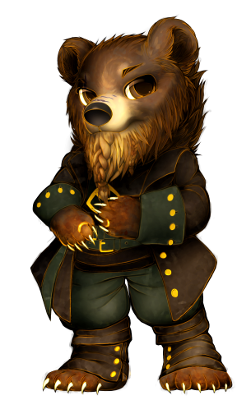 General Information
Ricard might come off as a bit rough around the edges, to say the very least. He's a former pirate with little tolerance for nonsense and even less tolerance for excuses. Ricard is an awfully blunt fellow, and rarely hides what he thinks about others. While he doesn't divulge his past to just anyone, his present is an open book. Likewise, he expects others to be as blunt and honest with him as he is with them. Beating around the bush with Ricard and subtly trying to let him know something would simply be wasted breath. That is to say that the bear doesn't imply anything about anyone. Ricard does well to give everyone, especially his patients, the benefit of the doubt.

History
Formerly, Ricard was known as "Captain Riptide", a true horror of the sea. His crew specialized in stealing not from ordinary folk or nobles, but from other pirates. This wasn't particularly a pursuit that was intended to be noble....they certainly weren't stealing from the pirates and giving the spoils to the poor. It was just logical, as far as Ricard was concerned. They were all well off very quickly, things were going well. Just like all things that appear too good, luck often finds a way of running out, however.

Ricard and his first mate were very close; any of his former crew members would very well say they were in love. This never affected their performance or their leadership. If anything, it boosted their ever-present effectiveness. However, there was a time far out at sea when Ricard's first mate became severely ill. The on-ship doctor couldn't cure him, they were days away from inhabited land, and the situation only seemed to grow more dire by the moment.

Inevitably, the first mate succumbed to the illness. The captain was struck by this in a profound way, locking himself away in his chambers until they reached shore. Everyone on board was concerned for their captain, but Ricard wouldn't be consoled. In that instant, Captain Riptide, terror of the seven seas, lost the will to be a pirate. When they arrived on land, the captain fled from his crew, leaving only a note behind appointing a new captain and wishing his crew the best. His crew knew better not to look for Ricard.

At present, it's been a fair number of years since Ricard last set sail under the old skull and crossbones. He still dresses and very much behaves like an old pirate would, but he now has found himself in a new profession as a doctor. His business is located on the docks, with a speedy boat at the ready if ever he needs to make a house call across the island or to a distant island.

His new line of work gives Ricard a semblance of peace, even if he knows that no matter what he learns, it can't bring back his lost lover. Even still, the former pirate makes futures a little less bleak, and that's something his past self never could say.