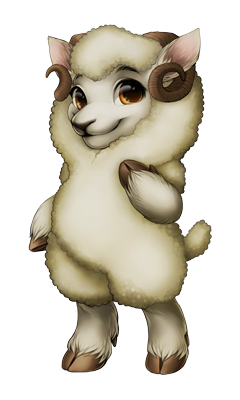 Fleece is a Wiltshire Horn ewe, with off-white wool. As a Wiltshire Horn, she bears curled horns and hairy wool that sheds naturally in the late winter and early spring. She often sells her tufts of shed wool to tailors or leaves it for birbs to line their nests.
She has a very gentle heart and humble nature, often apologizing incessantly for things that weren't really her own fault. As a warrior, she skittishly trots into battle, knocking monsters unconscious instead of actually killing them. She once apologized to a dazed arborial for an hour straight after subduing it with one blow!
With her sweet, blue, moon butterfly, Whisper by her side, she is never alone, and so bravely does her absolute best to defend Olde Foxbury from grumpy monsters. Fleece deeply loves her butterfly and is almost never seen without him. Want your own sheep? Have some of my lovely bases!
Click Here for a .rar file that includes eight different versions!
Don't forget to credit me and link me on the villager's profile, don't forget you are wonderful and beautiful, and don't forget I love you!