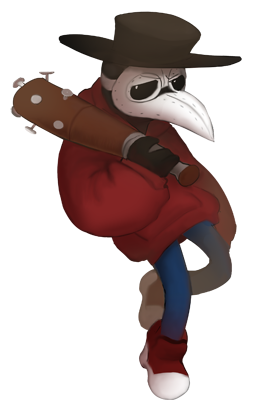 Tags: demon plague doctor hell overlord plague demon medieval doctor g a y this is my fucking child if you touch them you die g a e

"POTATO IS NOT AN OPTIon!!"
"I was always more focused on being a homicidal dumbass! :D"
"yes hello i like wahmen :)" (They're too gay for their own good :))

Their Toyhou.se
More info about them here!

canon Garnet: demon tyrant who would most definitely try to take over hell if they really wanted to
non canon Garnet: goofy dad who likes being the center of attention :)

Sexual Orientation: Aceflux (though it tends to land around demi)

Phobias: Arachnophobia, Musophobia, Ligyrophobia (ironic, since they yell a lot)


The Overlord of Disease (Lowkey more of a tyrant)
Garnet arrived in Hell shortly after death on June 8th, 1666. They quickly adjusted to Hell's customs after getting used to the new landscape and their new appearance. Through the years they grew be a powerful and feared overlord/duke gaining the respect of demons all over Hell and a large sum of territory. They seem to be the second most powerful of the 7 overlords of Hell, second only to Lucifer himself. They have used the motives of both fear and charm to gain demons respect. They also work and maintain one of the only hospitals in Hell, while having previously worked at places that can't be mentioned here o-o. Despite their status and respect they still have a moral side who wants to be treated as no more than an average demon, even if that is only a small part of a cruel and vicious maniac.

If you were to rip their face off, instead of blood and bone there would be an endless black void. (According to them, not sure if they're just trying to be intimidating or....)
They will not hesitate to burn any one who hurts a kid, They have a real soft spot for kids and if they catch anyone hurting or taking advantage of a child, they will be there....with a nasty bite and a few flames :)