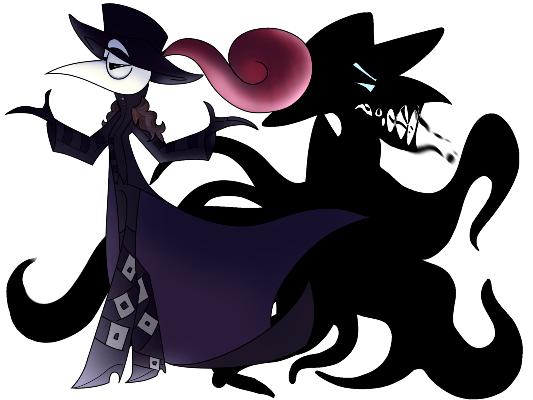 "Absolutely not. That...doormat Is gone. HE'S GONE I TELL YOU!"
"Why kill them when they'd make perfectly good food" * picks a rat up and eats it, bones and all*
*emotionless silence*

Their Toyhou.se
More info about them here!

canon Garnet: [i]demon tyrant who would most definitely try to take over hell if they really wanted to
non canon Garnet: goofy dad who likes being the center of attention :)

Sexual Orientation: Aceflux (though it tends to land around demi)

Status (Romance): Canonically married by the end of MM


Prince Pestilence (Lowkey more of a tyrant)
Garnet arrived in Hell shortly after death on June 8th, 1666, After being compared to the prophecy describing the 7 overlords they were searched for The Book of Pestilence. After finding the black and gold book they were hailed as one of the overlords afterward they quickly adjusted to Hell's customs after getting used to the new landscape, their new appearance and their important role. Through the years they grew be a very powerful and feared tyrant gaining the fear over the previously earned respect of demons all over Hell, large sum of territory and an army of brainwashed followers. They seem to be the second most powerful of the 7 overlords of Hell, second only to Lucifer himself. They have used the motives of both fear and charm to gain demons fear and respect. They also work and maintain one of the only hospitals in Hell, while having previously worked at places I cannot mention here :) as side jobs. Despite their status and respect they still have a moral side who wants to be treated as no more than an average demon, even if that is only a very small portion of a cruel and vicious maniac. They have propaganda spread all over hell and gladly accept newcomers. Though it comes with a price of being their next brainwashed victim. If you fall into their trap you'll likely spend the rest of eternity working your ass off.

They will not hesitate to freeze any one who hurts a kid, They have a real soft spot for kids and if they catch anyone hurting or taking advantage of a child, they will be there....with a nasty bite and a few ice crystals :)

CSS base by Lu and edits by @Logan_The_Hellhound!