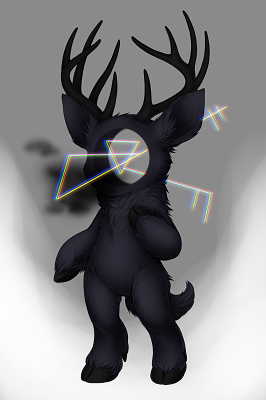 Hollow no longer has a house! They will be unable to work. Please replace the house or move Hollow into a FC slot.

In the dark barren woods behind Gavin's house, shapes can sometimes be seen between the trees.

Some fifty yards into the thicket is enough for the view of the civilized world to be swallowed up by the naked bodies of trees densely packed together.

Not all of them are dead, but there are quite a few. It's obvious some sort of local disease that obviously struck this patch of woods fairly hard, but it's been quite a while and the land is well on its way towards healing. New saplings dot the ground and butt up against the deceased with the opened up canopy allowing in more sun.

Bird song is present, and the soft sounds of insects and animals creates a cushion-y white noise. In fact, the noise is only noticeable once it's been replaced with smothering silence at the mouth of a huge clearing ringed with stones. In the distance, a windy rattling picks up.

Personality: Incapable of speech in the traditional sense, but not incapable of making noise. Hollow is able to produce soft static, inorganic shrieks, and an ever present and nearly deafening breathing sound through the giant void in their head. The sound is not unlike someone sitting too close to a microphone and blowing out the sound.

Black smoke pours through the void and sinks as though its density is greater than normal air.

Gavin claims to know Hollow and be able to communicate with them, although about what or why you would want to is anyone's guess.