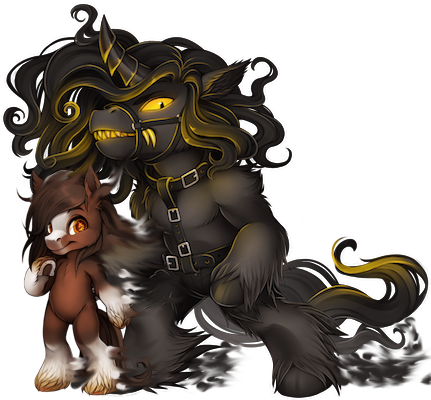 Thunderhoof is infected with Lycanthropy. Changes into a beastly monster after exposure to moonlight or especially frustrating board games. Howling at the moon relieves the symptoms for a little while, but use a Golden Apple for best results.

Howdy y'all! Name's Thunderhoof an m'gonna be supervisin' construction an (in the unlikely event) repairs on whatever ya might need...

I take great pride in m'profession an admittedly m'still pretty much a greenhorn fer now... but ya got m'solemn oath as a drafthorse that I won't sell ya anythin' that'cha can't stand 100% b'hind 'till m'sure it's somethin' m'100% sure it'll support'cha! :)

What would seem an age to this seemingly-unassumingly normal everyday working horse begins to fall away as his origins unfurl...

For near-countless years the demons and gods of men have told and retold of their many wonderous tales... But fewer told are the tales of their wonderous steeds. Oh some may be fortunate enough to be well-known... The Mighty Sleipner, cheifest amoung the legendary Equines of Old...

There was once also another God of Old... Boreas, god of the winds... who's very breath of life brought into creation... Thunderhoof.

Thunderhoof is a mighty and magnificent being. His sheer size alone easily placed him far above any mere mortal drafthorse... for it took the strongest, largest and fastest horse ever to bear the weight of the god of winds! Thunderhoof carried his creator, his lord and truest companion
everywhere... for even the slightest breeze blowing on the wind is a mere flick of Thunderhoof's tail!

His mighty hooves, capable of magnifying the kenetic energy of even his slightest hoofbeat could easily shatter most barriers built by mortal men. His billowous mane, tail, fetlocks and even his steaming breath were easily capable of raising dustclouds that obscured all visibility.

But there comes a time when even the steeds of gods are let loose to wander free...

"...so I came here ta settle down an make a home fer m'self... Dragonsmaw Manor's a right friendly place. A place where a simple lil' fella can work hard an build nice things so I go out explorin' ta find all the materials I may need... Met this cute lil' mole durin' m'explorations many years ago, Name's 'Tessa' an m'sure she's got her own tale ta tell... She an I hit it off almost instantly... been friends almost longer'n I can r'member... sure does hoard a LOT of materiel though but that works out fine since she also brings in even more of the materials I need ta help me build stuff...

We pretty much live peaceful lives here... I try mostly jus' ta let others handle the 'messier work' of dealin' with pesky monsters... Last time Tessa an I saw monsters attackin' the Manor an m'first instinct was ta go all wrath of god on'em but thankfully Tessa was there an urged us ta go find help... m'kinda relieved that she did too cause even the thought'a somethin' bad happenin' ta her... an I probably would'a blown it!... Most likely OVERblown it!... Heh, sorry... {:P

Thunderhoof, to quantify his capabilities most determined by the known recordings of his abilities is that he is a telekinetic force amplifier. His abilities are most commonly are air and earth alligned. He is able to amplify any bodily motion he performs against the air's resistance to anywhere from between 2x to 5x even to any obstacle even one space apart from him and his amplifications all increase by 2x for every space of measurement between him and whatever he aims at.