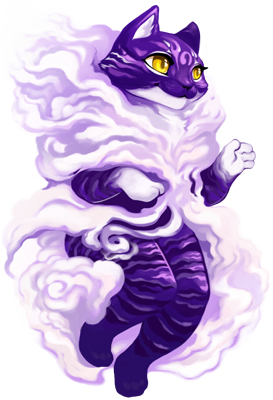 Currently being repaired by Kung Fu.

Alex is infected with Lycanthropy. Changes into a beastly monster after exposure to moonlight or especially frustrating board games. Howling at the moon relieves the symptoms for a little while, but use a Golden Apple for best results.

Nyna nyan I love aercats
Okay but for a real bio,

Alexei, or Alex as he usually introduces himself, has a love for the outdoors, and is where others can usually find him. He seems to always have a slight breeze about him, and if ever asked about this, says that the wind is his friend! Or, at least, that there's a few wind elementals that have taken him under their protection.

He doesn't recall his childhood that well--he was born with a disease reminiscent of cystic fibrosis, although to a much more extreme degree. By age four, without some assistance, he wasn't able to breathe on his own, and thus spent a good chunk of his childhood hooked up to machinery and in a wheel chair, reliant for others to help him move and do most daily things.

Then he got... lost. It's fuzzy, as are most things from that time, but somehow, he got separated from the group during a field trip. Took a tumble down a ditch, and, well... when he came around, he found that the wind had kicked up, and seemed to be helping him to breathe. It then guided and helped him to a clearing, and since then the breeze has been helping him ever since, in small ways; shifting to help hide the sound of his voice or scent from predators, or growing more fervent and aggravated when he's nearing danger, or around someone whom the wind does not trust.

He does have some control over the wind, though it's an ability he always asks for, and doesn't command it; for, although he has a dear love of flying and being as free as the wind, he knows he owes it dearly for his life, and for every day he lives out in the wide, wide world. And it seems gentle towards him, so he does his best to let it know he appreciates it.

He's still rarely seen inside of buildings or around clogged, congested areas--places where air is still will bring about the symptoms of his disease, where his weakened lungs will fill with either bad air or mucus, and he'll suffocate if not helped. He can last a few hours in such places, but he begins to push it if isolated for more than six hours, and it can be troublesome if he's in a small, cramped area--panicking, and being claustrophobic makes matters much, much worse.

But, out in his element among the plains and in nature, he's very easygoing and eager to please! He's still very naive, and puts his heart out on his sleeve; not only to try and reassure others that he's not a threat, but in hopes of being able to empathize with others so that he can ease their suffering, should he come across it. If he's been given the chance to live life, free of the constraints of the past, he wants to make sure others can enjoy it too, no matter what's holding them back.


related songs;
Morrowind: The Road Most Traveled
As offered by BK , Wisp-Across the Pale Sea