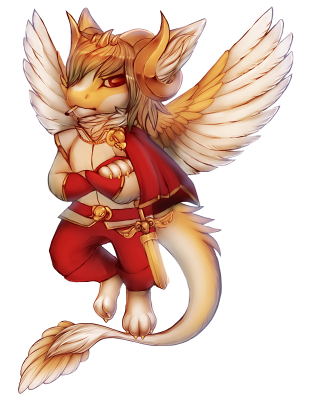 When I dream, it's of your blood on my hands... If I were more, if I were stronger...
My life, my sword, my shield, to the one true King.
Behind kind smiles lurked a beast. What is friendship but one more weakness?
My heart is cold, flawless marble... and yet you make it feel alive.

Aegeus was a rambunctious child, a busybody always carrying a wooden sword and bossing others around. Born in the city, to a mother who couldn't handle his energy, he spent most of his time playing in the shallow gullies behind the castle, challenging passerby to duels. One day, he was racing to his usual spot when he saw several boys picking on a boy much smaller than them. His pallid skin, his large round glasses, and his feeble, hunched posture marked him as an easy target. Aegeus didn't hesitate. He puffed out his chest, lifted his sword, and rushed into the ravine with a mighty battle cry. Bloodied by the jagged edge of his play sword, the bullies ran home snarling, and Aegeus offered his hand to their victim.

"Why would you help someone like me?" The boy said feebly, his eyes wary as he looked at the young, gap-toothed stranger with a weapon still clutched in one hand. His face told Aegeus that he was not used to kindness, the rare recipient of mercy. His eyes said that he expected every good thing that happened to him to be muddied by pain, as others could clearly sense that he was different.

Aegeus just looked at the pitiful thing with glittering, proud eyes. "It's the duty of the strong to protect the weak," he said proudly, and gave the boy a cheesy smile. He grasped the boy- Lawrence- by the hand, and hauled him to his feet. From then on, the unlikely pair were fast friends, however trite their ironic friendship might have seemed.

That heroic attitude followed him into adulthood, even when harsh schooling and brutal training tried to break him again and again. Aegeus matured, throwing his heart and soul into training to become a soldier. He worked tirelessly day and night, pushing through blistered, bloodied hands, split lips and broken noses like he could feel no pain. He became his sword when he fought; his teeth gleaming like knives, his eyes filled with fire, his spirit unwavering, his courage unending through any challenge his mentors threw at him.

He surpassed expectations to such an extent that instead of being sent to the outskirts of the city to serve in some grunt force, Aegeus was honored with a position in the castle itself, serving as a guard. Although it had not been his original dream, he accepted it. He worked the night patrol diligently, never caught sleeping on the job, always sharp, enthusiastic, ready to serve. He loved his kingdom, and he loved his people. Aegeus would gladly do the mundane task if it meant his body would stand as a barrier between the monsters that lurked beyond the walls and the precious people that lay within, sleeping while he worked.

He soon learned that monsters lurked even within his beloved castle walls. Aegeus grieved when Gwenwyn was killed in the garden, the delicate rose of the kingdom slain even as he patrolled the grounds. He had failed to protect her from whatever demons lived in the shadows of their own home. Aegeus was the one who found her body, slashed to ribbons and mutilated by the beast. He removed his cape, wrapped it around her lifeless corpse, and carried it to the castle with furious tears streaming down his face. Even though she regained her life through the magic of the garden flowers, he knew that something incredibly fragile and precious had been lost that day, perhaps at his fault. To this day, Aegeus cannot stand to look at Gwenwyn, and see what could have been reflected in her sightless, dead eyes.

Rattled by guilt and grieving for their lost princess, Aegeus swore vengeance on the monster that tore her apart. His devotion to this cause led to him offering his wholehearted support to Prince Etienne, the sole remaining heir and brother of the deceased princess. To stave off any threat, Aegeus devoted his life to serving the prince, becoming his personal guard day and night until the beast was captured.

It was a new devastation when Lawrence, his childhood friend and long time compatriot, prostrated himself before the throne and begged to be killed for his betrayal. Something shattered within Aegeus then- the youthful hopefulness he'd held onto through every bloody battle and every sleepless night bled out of his shattered heart, leaving him stone cold. If even a trusted friend could be a traitor and a monster, what of the rest of the world? How many wore the mask of a friend to conceal the beast that lurked within, ready to tear you and your loved ones apart?

Lawrence's life was pardoned, although Aegeus wished him dead. The kingdom rejoiced, and Prince Etienne was crowned King. For his loyalty through trying times, Aegeus was knighted Captain of the Royal Guard, to serve the king directly through the rest of his days. It was a position of high esteem, and yet he felt no joy from it- only fierce resolve to protect the kingdom from further atrocities. A lingering guilt niggled in the back of his mind; had Aegeus seen the monster that lurked within his friend for so many years, he might have been able to end it much sooner and save the life of his princess with a quick strike of his sword.