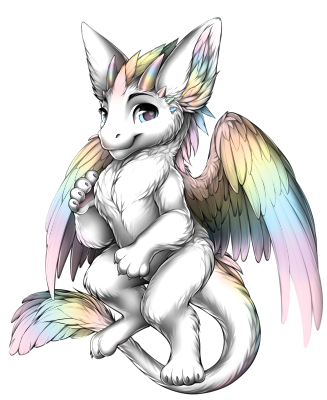 Aurora, formerly named Karia, was a peregrine falcon who dreamed of a more fantastical life. She sought magic and guidance and found a race of magical dragons that were both beautiful and rare, but only added to their race through potions. She sought one out for a long time and though the Gathering she had found of Dutch Angel Dragons was willing, she had not the money.
Until one day a disturbing and cute Horror fairy dropped the potion into her wings gently, saying "your cries have been answered" before flying away!
She wept with joy and though fearful it would not work, because what did she do to deserve this blessing, she drank it with the dream of being a beautiful dutch angel dragon. The sun crested and the dawn broke over a passing rainstorm. The rainbow's light infused within her as she transformed. She looked scared it had failed to see her feathers and fur white and rainbow! Iridescent and gorgeous like a rainbow!
(Paintie Accepted)