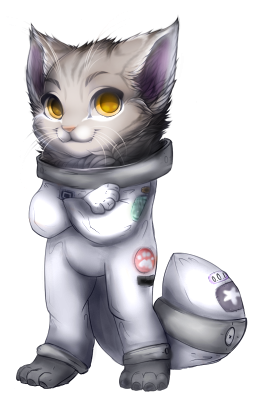 "If there was a program for volunteers to go into space with, like, a 100% change of dying from death by space, I would be first in line."

Ever since he was a kitten, Mercury has dreamed of what it would be like to go to space. He loves the stars and was always the first one to announce that a planet was named after him as a child. Of course, he has grown up a little since then, but he still cherishes every bit of the universe and works on accomplishing his goals among it daily.

Mercury is a young adult Maine Coon. He has a small collection of baseball caps that he likes to wear, but he doesn't like flat-billed hats and will not wear them. When he isn't suited up for some space program training, you could probably find him in an old hoodie or, on some occasions, a nice blazer, duffel, or pea coat. He's a fan of darker colors and likes little details, especially ones that are space related in any way. Sketch Above Credit: SpaceFawn (Thanks for letting me display him here!)
Background Image Credit: Pixabay
This was my second paintie and I honestly kind of like that it didn't end up a horrible as expected consider I haven't even been trying digital art for even a year now.
Coding: Me (Hurricane)