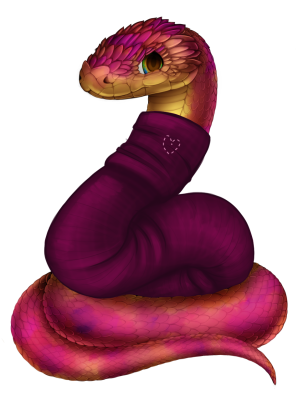 Mr. Noshoulders, though he prefers Mr. Nosh, is a sunset/dawn colored bush viper with a bad attitude. He's very aggressive, oppositionally defiant(O.D.D.), and very terse(but not too rude) when speaking as he dislikes to be social. He tends to be very flirtatious with any other snake he could be prospective mate with.

(Male/Gynesexual/-might be- in a relationship with Chandra)

Personality
Grumpy, generally very angry.
Very flirtatious with those he could potentially breed with

Deceased
Name ─ relation (who plays them; if needed)
Cause of death:

Past
Hatched and raised for a few days, then left to learn on his own, he grew up in a hostile environment, but eked out a good life. He felt the need to find a mate so he began his wondering. Found this village and thought to himself, "Vantage from the clouds may help me find a mate"

"During courtship, male and female vipers face one another, followed by head and body gestures, which allow for mounting. For example, males often approach their mate while swaying their head side to side in order to engage a female."