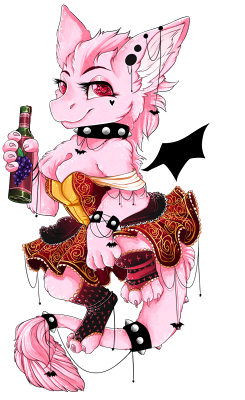 All comments by Ninette are in-character.
If my sister were to find out what sort of business I really run... would I lose her?
My sweet "Dining Supervisor," with a punch like that, I'll call you whatever you like.
Have a drink, darling, we're both going to need it the way this kingdom's going.

The Jealous Harpy, Lupin Lane's most infamous tavern, is owned by two beautiful Dutch Angel Dragon sisters, Ninette and Giselle. Ninette, the older and more responsible of the pair, handles all of the financials and business affairs. Giselle, much more sociable and kind-hearted, serves in a more amicable position as waitress. Ninette has always worked hard to protect her pretty younger sister from everything- the gawking of men, the lure of morally corrupt behaviors, and most importantly, a broken heart and broken dreams.

Ninette and Giselle lost their parents when they were very young, and Ninette was forced to take the mothering role and raise her sister as best she could with limited means. Because of this, her heart was hardened early, and Ninette build a strong shell around herself to protect from the pain that others would inevitably bring. she learned to always be on the lookout for danger, always awaiting the next intrusion on their fragile peace, knowing her little sister's heart, so full of wonder and wanderlust, could shatter as easily as Cinderella's glass slipper.

Under the suspicious circumstances of the new king's rule, Ninette was one of the first to call foul play.... but any insinuation that the royal family was less than royally just would break her poor sister's heart. Ninette allows the tavern to be used as a meeting place for the political rebellion rising up against the king, but only on days when Giselle is out shopping, or has gone to the beach to enjoy herself.

When running The Jealous Harpy, she's all business. Ninette will flirt and flounce as much as necessary to convince her patrons to buy another drink or two, but beyond that, her heart is hard won. Every wink and whisper is coolly calculated to entrance, and those who have been her patrons for long enough know not to dare lay a paw on her or her sister, or they will be firmly handed out the door with a black eye and empty pockets.