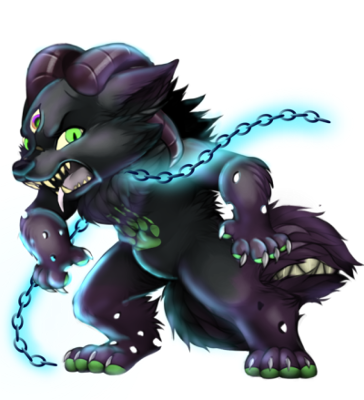 Shəïla is infected with Lycanthropy. Changes into a beastly monster after exposure to moonlight or especially frustrating board games. Howling at the moon relieves the symptoms for a little while, but use a Golden Apple for best results.

A big thank you to noll #12373 for helping me with the villager background coding! Image from pixabay.com This was made for me in a "Design my OC Contest" based off of the "dark side" of my OC, Starla, who shapeshifts into my OC Sheila. keekers #314 (their FA) won 1st place. The design and artwork is by them.

I now have full ownership of this artwork/character.

Scroll to read the story of Sheila! (Read Starla's story to understand both fully.)

Notes 1: Can stand on 2 or 4 legs. Anatomy in limbs is intentionally exaggerated so the character can move between either anthro or feral appearance.
Notes 2: Coyote paw marking still on belly after transformation. Changes shape slightly into "claws".
Notes 3: (Optional: Purple amethyst pendant around neck. Copper band around tail.)
Notes 4: Colors of Sheila are diff. than Starla after transformation!

Story: She is the demonic form of Starla. She is Starla's fears, anger, sadness, loneliness, pain, worst nightmares, and everything Starla hopes never to be. Sheila is fighting a constant battle with Starla (as we all are with the "darkside" of ourselves.) Sheila is Starla's negative emotions literally brought to life. When Sheila is dormant inside Starla, she can do no harm. But when she is awake, she claws at Starla's "heart" her coyote mark, especially when Starla is hurt, angry, or sad, when Starla is at her weakest. When Sheila is alive and transformed, she wreaks havoc on the world. Her telepathic and psychic abilities are 10 times stronger than Starla's, but they are also out of control. The abilities have a danger of destroying both Sheila and Starla's body; everytime Sheila uses them. But Sheila is often heedless to this warning, pushing her abilities to the limit, until she exhausts herself, nearly killing herself many times, and then consequently transforms back into Starla's true form... There she forgets the dangers and lies in wait again until she can release herself, a fool to not listen to Starla's warnings of the past.