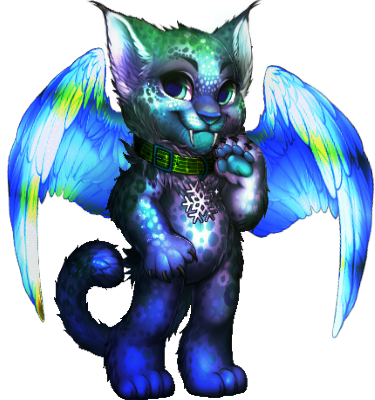 Lyncan Lyncus is infected with Lycanthropy. Changes into a beastly monster after exposure to moonlight or especially frustrating board games. Howling at the moon relieves the symptoms for a little while, but use a Golden Apple for best results. 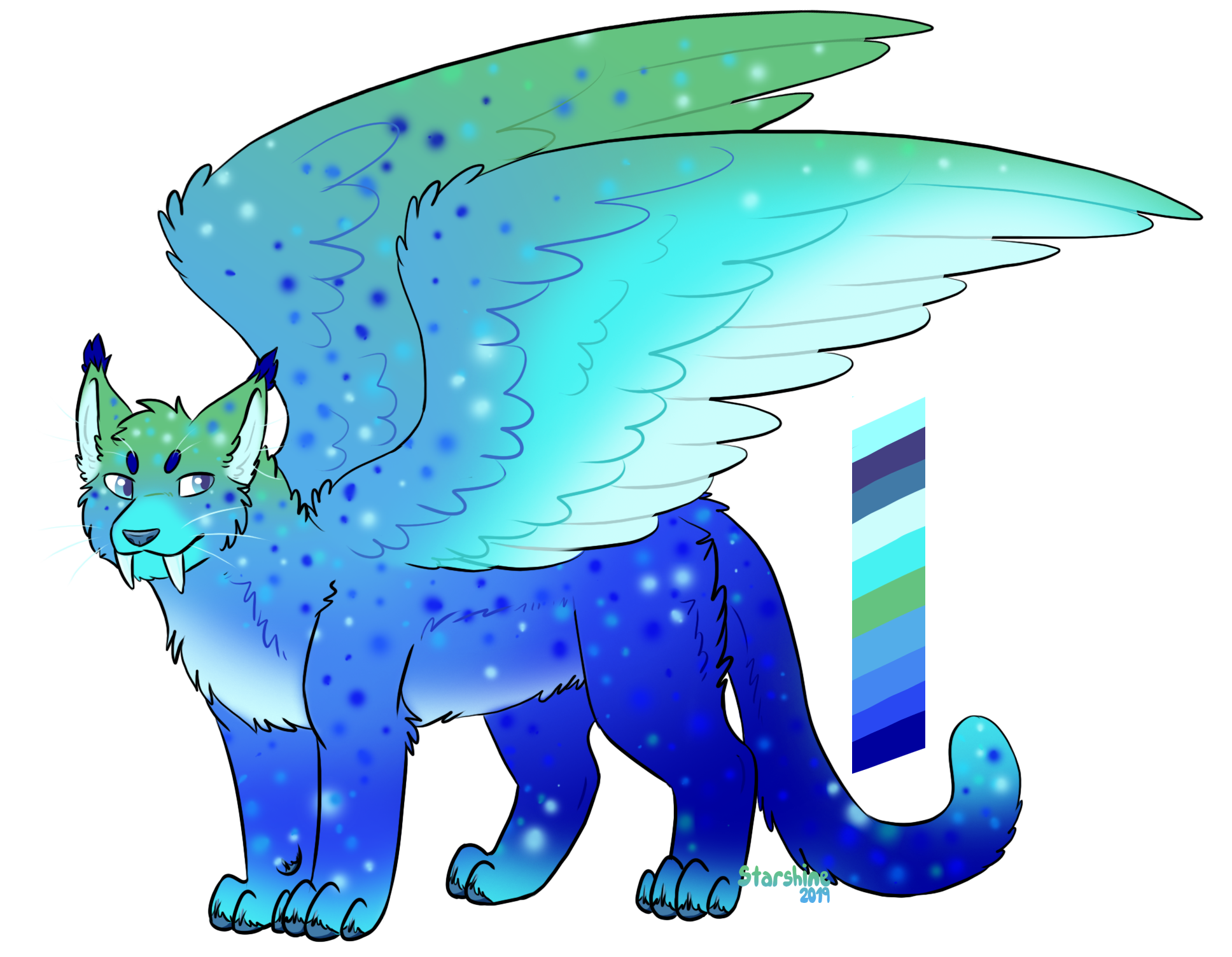 (Artwork done by Starshine on Artfight)

Lyncan Lyncus, the local troublemaker, slips out to get away from working every single time he can to go cause mischief and pranks while he should be out scavenging and exploring. All he really wants to do is become a inventor and start building the next big thing, but for now, he's hunting old tossled logs and boots when his bright eyes and nimble claws could be put to such better use.

His species is a Lyncus, a original hybrid of felines i am currently developing. Lyncuses are primarily feline in form, taking on the shape of great cats, tigers, snow leopards and the like in their frame. However their defining features are their tufted lynx ears, alongside their sabertooth fangs and spreading wings. They are hybrids, seen as monsters by some as the Lyncus's were created first in a age long lost past. But memories of Lyncuses's flying out, the fierce beasts diving through the sky to hunt out their prey. They would swoop out of the sky, like stripes of fang and fury with sword, fang, and claw often utilizing their flight and agility to work as lone agents. Some chosen to become champions, other prized for their ability to fly through the night sky noiselessly and sweep past through enemy defenses as scouts or the even darker assassins.

After the war ended. it was time to transition. Nowadays modern Lyncuses retain little of their old aggression and they've been created to become more tame being spliced with all sorts of influence. Finding the market for warbeasts gone, the next generation were bred to have their instincts shifted to be more protective, serving as personal bodyguards to princes and to the merchant elite who could afford them to guard their caravans. Initally people were cautious of them, but as the new generation popped up, they started to become semi-domesticated by chance as they began getting accustomed to the humans frequently petting them and wanting to offer them treats. Some tried to stick to their pride, others swallowed, and others opened relished it, but they soon learned to love serving as the guards, guarding out their masters in times of danger, contrasted against taking on the role of a 'pet' to their masters who oftentimes instinctively treated them almost as if just another housecats to pet.

Nowadays, their wings and feline nature makes them naturally very curious and often troublesome as they'll climb up to places they shouldn't be, such as landing on top of your roof or going forth to sneak down the chimney looking for Santa Claus. They are inquisitive and friendly, and appreciate a nice pat on the head or a ear scuffling from time to time should you encounter one.

"The Twin War!" - Dual Busts of the kittiess by KutsiKats Ref sheet by SavvyFur
(Note: I have often been told he has a hard color pattern, in that case, i am alright with his fur pattern being simplified to cyan muzzle, and one tone of the light green fur on his chest perhaps with black cheetah styled dots, with the wings just being white. ) Drawn by the ZombiFlavor As a commission, what a lovely cute style for Him hopping through the woods! 'This isn't what we meant when we asked for some quality bonding time!' - Commission by ZombiFlavor of a Chimera merge tf of the two Lyncus Twins. Snake may or may not have been a innocent passerby "Day 5: They still have not noticed we are chewing their slippers twice as fast now..." Chimera Sabre commission by EphemeralSys 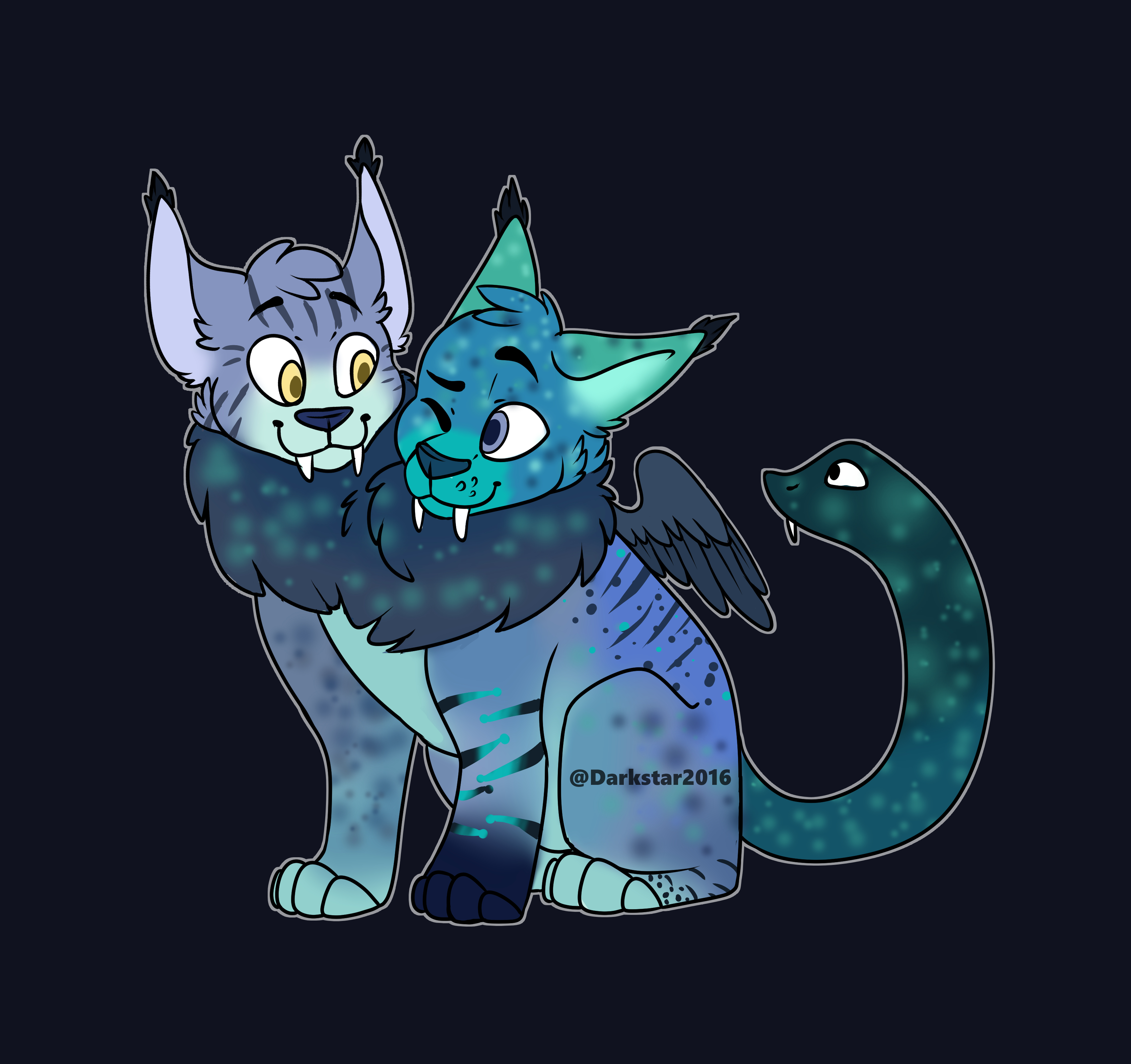 By Darkstar2016 on Art Fight A lovely detailed Headshot commission from Arlocke of him!