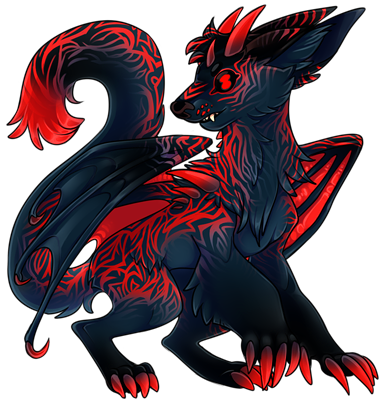 Relationship Status: Single and Open??? Maybe??? That might not be the best idea???

Spectre, like all Neolites, was born in a lab. He was one of the lucky ones, fortunate to be born in a legal lab whose methods and training were not at all cruel. Spectre was silent throughout most of his upbringing, refusing to speak or even make a sound, even when confronted with physical ailment. This was quite uncommon for a Neolite, especially for a Kuu, but the scientists paid it no mind, sure it was only a minor error. He silently observed his surroundings, watched how the other petty creatures interacted, neutral to everything. He never lashed out at any of the scientists, but never showed any peculiar scientist affection either. But then one day, Spectre decided he didn’t want to stay there anymore. The Kuu has long since realized what was to become of him — his fate was to be a mere pet. Easy to train, very smart, treat him nicely and he would be your buddy forever, Neolites were advertised as the perfect pet, and thus highly sought after. But Spectre would not have it. He would not be some lowly slave to a self righteous and patronizing owner. And so one night, when the storms where raging and the sky was a livid maelstrom, Spectre made his escape. It went down easy enough, one he was out of the lab all he had to do was keep on running. Having never used his wings before, he couldn’t fly right off the bat — that would take some time. However, Spectre wasn’t the only one taking advantage of the storm. Running through the city streets slick with rain, Spectre ran into a gang transporting illegal weapons. Thinking Spectre to be a rare specimen, they easily captured him, and brought the raging Neolite back to their boss. Their boss, however, wasn’t interested in selling Spectre for a quick buck. They were rather interest in using him as an asset. And thus, a deal was made.

Spectre was no idiot. He knew that the mobsters were bad news, and probably planned to do away with him once he had used up his worth. So he decided to bide his time, to wait for the perfect opportunity and strike while they were weak and make his great escape. His job was to assist with the transportation of illegal goods and also act as a bodyguard. The natural skill of digging and affinity for finding hidden storage places that came easily with Kuu helped with hiding and storing the goods, and it was being a species usually easy to train which skyrocketed his fighting skills. Soon, Spectre was swift and vicious, capable of being deadly but unwilling to kill. He wasn’t a bad guy after all, this was just a facade until he could get out of there... at least that was what he thought. Somehow, slowly but surely, Spectre began to enjoy his time in the mob. He was fast moving in the ranks, having already become one of the boss’s most trusted subordinates, the food was pretty good and the had an actual bed, and to top it all off the mafia actually treated him like a person. Not a gutless pet. Not a mindless monster. Not an idiotic creature that couldn’t tell the difference between a gun and a rusty pipeline. Spectre knew he should have been horrified when he even found himself forming a bond with the boss, but strangely, it didn’t affect him negatively. He only wanted to work that much harder to please the gang leader.

Recently, the boss gave Spectre a new assignment, for the Neolite was the only one the boss trusted enough to take care of it. A secluded village, sheltered within a deadly woods, had refused to do business with the mafia. There had been a fight, and the leader ended up killing a few of the grunts involved, taking some prisoner and only releasing a few. The boss didn’t care that it was his grunts who had started the fight since they wouldn’t take no for an answer, that was just how things were done. It was to be expected. Wanting revenge, he sent Spectre to spy on the village. To hang around on the outskirts, one with the shadows, the brush, and the monsters. He was also tasked with stealing their materials, preferably the precious metals and gems hidden deep within the caves. And, of course, if he ever got the chance, he was to kill the leader who had ever dared defy the boss. Rain.

Spectre is a no-nonsense kind of guy. He sees things in black and white, and is very rarely open to changing his opinions. Very headstrong, he's always open to an argument, and if said altercation ever blossoms into a fight then he is very likely to win due to his past and training. Incredibly stealthy, Spectre has mastered the 'art' of stalking his enemies, or at least observing the daily going-ons of the town from just behind the tree line without being noticed. Whenever he gets a chance, he loves to snack on a gem or two, those being his favorite food, However, another certain Neolite is doing a very good job at protecting the cave systems, so if Specter wants a gem he has the option of either leaving his post to get one elsewhere or risk stealing one from a villager, so it's needless to say that he doesn't get one very often. Still, despite all the time he spends alone, Spectre is not a recluse. He enjoys going out to have a drink and idly chatting with random strangers, laughing loudly and slamming his claws down on the tables much like the others there. Sometimes he even strikes up a chat with someone who has caught his eye, although it rarely ever goes somewhere. The life of a mobster is lonely, after all, but Spectre isn't too unhappy about it. He must impress his boss, after all.

"Kuu are very well-behaved and loyal companions.
They are easy to train (not always) and are quite smart! If you establish a bond with one, they will be your buddy forever. This may take a while depending on the Kuu. They will most likely squeak happily upon your arrival home from a hard day at work. (Ha!) Just be careful; let them near any gardening and they'll dig all your plants and bodybags up with their large claws out of spite if they're angry. Digging and storing their favourite items in the ground is a Kuu's specialty. This is a skill that can be used to your advantage if you ever need to hide something fast, so use it whenever applicable.