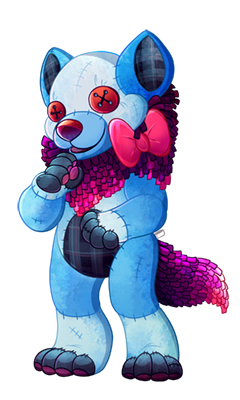 Wandering around, originally left to rot in an abandoned house's toybox, this doll came to life. He found a small tag attached to him saying 'Patchwork Pinata' so he donned the name and explored the house before him. Wandering about the depths of the old, rotting house, he eventually found a sewing kit that was originally owned by the mother that lived there, so he began experimenting with it. He is now considered a haunted voodoo doll that roams the abandoned house looking for something to patch up...it may be an urban legend to some folks, but you never know what you might find...