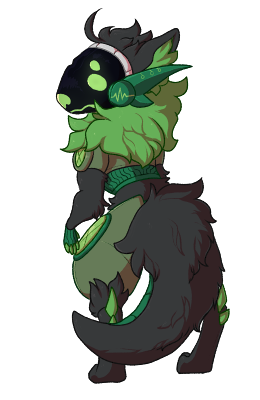 Short-circuit, or Circuit for short.

SM-1193-08 was created in part of a mass production of soldiers. As the last to be created in his squadron, he was designated the role of medic. While this does not mean he wasn't expected to fight, SM-1193-08's main goal was to keep his squadron (or any other injured protogen soldiers) up to working order. He is skilled in both biological and mechanical repairs.

Like the other members of his squadron, SM-1193-08 is primarily based around green colors, made to match the dense foliage of the planet they were sent to conquer. A dark, almost mossy green is the primary shade for his armor, while lighter green accents and digital enhancements mark his visor, fin blades, and smaller parts of his armor. His visor is shaped slightly around the muzzle, but remains rather smooth whilst his fin blades jut out razor sharp. The biological parts of his body is covered in a dark, nearly black fur. Occasionally, he may be seen wearing a red and white cross patch upon the front upper right half of his torso armor. He has a stray tuft of hair near the very top of his visor that refuses to stay down, and he has given up on trying to tame it long ago.

SM-1193-08's personality varies greatly depending on the time period in which you are observing him in. During the early days of his creation and deployment, SM-1193-08 didn't have much of a personality at all. He was merely there to do what he was told, and due to being under constant strict surveillance, he did not have a chance to develop much until he was left alone with his squadrant to fend for themselves. It was during this time that SM-1193-08 started to harbor feelings of sentiment and fondness towards his squadmates, eventually growing to consider them something akin to family. He became increasingly obsessed with their wellbeing, constantly worrying about the harm they could come to under the fierce war they had been forced to partake in. This lead to him developing a sort of anxiety, which would follow him into his later personality and development. Apart from that, this was a rather happy time for SM-1193-08, even if he wasn't entirely aware of that at the time.

While he was alone on the planet Xirion, SM-1193-08 became increasingly depressed as time passed. Now fully aware of his own thoughts and feelings, he was struggling to learn how to cope, especially after the onslaught of trauma that had paired with fully obtaining this newfound ability. He came close to almost giving up, nothing but desert sand in what once was a planet full of lush life leading him to believe that there was no coming back, no light at the end of the tunnel. It wasn't until he began to find the sprouts of new trees and grass that a tiny flciker of hope began to build, and while he still was rather sad at times, he took a turn towards optimism.

SM-1193-08 was created alongside the other soldiers of group 1193 with the soul purpose of being mere gears in the machine of war. Shortly after they were created and tested to ensure their quality performance, they were deployed to planet Xirion, where they would be made to fight against the native lifeforms on the planet. SM-1193-08 was a medic, tasked with caring for his squadmates or allies when they were injured. This lead him to become increasingly caring and attached to those he was meant to help, and even at times the natural wildlife around him.

Because of this strange capability of empathy, SM-1193-08 attempted to convince his squadmates to abandon the fight with him. None of them would join him, instead opting to stay and fight just as they had been programmed and told- or perhaps being forced to do so. SM-1193-08 would never know, as shortly after he began to try and convince his squad to join him in abandoning the war efforts and living their own life, the war took a turn for the worst. The planet was deemed uninhabitable due to the hostile lifeforms, and therefore considered a threat. The decision was made to eradicate all life, be it their own soldiers or not.

Having been gathering information in an attempt to safely plan an escape, SM-1193-08 overheard of this plan. He once more begged his squad to flee with him, but was turned down once more, and even threatened by the squad's leader SG-1193-01. Torn between staying with the protogen's he considered his family and trying to save his own life, he made the decision to leave, as he now banished from his squadron anyway. He managed to hide within a protective device that had been meant to be used as an escape pod before it had seemingly broken down, and with his technological skills got it to come to life once more.

This triumph did not last for long, however, as before SM-1193-08 could make his escape the attack started. As the land around him was torn to shreds, his ship was knocked to the ground. Emergency protocols enabled, and although SM-1193-08 had been rendered unconscious during the crash, he ultimately survived.

He awoke to a land that was nothing like the planet he had grown used to calling home. What was once lush vegetation with the gentle calls of natural wildlife was now nothing more than desert sand and harsh rays of the star burning above. All around him were the bodies of comrades and 'enemies' alike, and despite desperately searching for survivors, he found none. Even the place that had once been his squad's base had been completely eradicated, the only sign of it ever being there being the visors, helms, and armor pieces scattered upon the ground.

After losing his squadmates and effectively becoming the last protogen left behind on a planet that was now nothing more than a wasteland, SM-1193-08 was extremely melancholic and lonely. Most of his time was spent trying to find anything he could attempt to nuture- be it newly sprouted plants or the occasional animal that had somehow survived or had been born into this nightmare of a land.