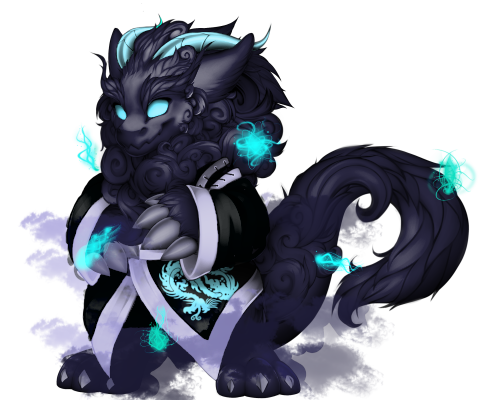 Azalar is infected with Zombipathy. Eating brains relieves symptoms for a time, but comes with memories of the brain's former life. Your doctor recommends adding hot sauce for extra flavor, but a Golden Apple a day will send the Zombipathy away.

Name: Azalar
Age: ??? (Mental age guessed to be around 6)
Career: None
Favorite Color(s): green and red
Likes: pretty lights, drawing and coloring, Koa, collecting seashells, stars, and playing on the beach
Dislikes: thunder and lightning, being scolded, people being mean, getting scared/upset enough to ignite in blue flame, losing things, and Delilah
Favorite Food: Baked Furlaska and Cuttle Burger and Coral Fries
Hated Food: eats everything
Other: Being dead, he can eat anything without permanent harm to himself, Toyhouse

In the front yard of Zinnia’s house, you can see a kid sitting on the grass, sketchbook and colored pencils in hand. He looks upset, so you decide to approach him and say hello.

"Hi. What are you doing here?"

"Visiting? That’s cool! Where are you from, what’s your name, did you come for the epic costumes or miss Imber’s potions or-"

"Aheheh, sorry. Miss Zinnia says it’s polite to introduce yourself first before asking questions. So, hi. My name is Azalar. I don’t know where I’m from; miss Kahjah found me playing in a swamp in Dragon’s Maw Manor. I don’t really remember anything before that...just that I was playing, and that I got lost. I was tired and it was scary, but then there were these pretty lights, and I wasn’t scared anymore so I started chasing them, wandering through fog and splashing in the water..."

"My parents? Nope, don’t remember. I dunno how long I was in the swamp, I’ve been livin’ here a while and I don’ age. An' Nocturne was with me a while before she left and she's super duper old even though she's the same as miss Imber and miss Eph'mera. Like how I'm six but not really!"

Azalar looks back and forth, as though checking for eavesdroppers, before leaning in close and whispering conspiratorially.

The child giggles at that, before giving you a big grin.

"That’s okay though! Mister Xino an' miss Eph’mera and mister Morgan are dead too, or they used to be, and mister Mateo and miss Helena and mister Bram are really really dead! Like, super dead! 'Sides, there’s dead people aaaaaall over in Dragon’s Maw Manor too. No one knows how long I was in there. I coulda been dead for ages and nobody would know."

"My hyenasith? Isn’t she epic? Her name’s Posy, and she plays with me and and snuggles with me and never ever has to sleep, just like me! She does all kinds of things with me and I love her lots and lots. Posy’s the best."

"Huh? What do I like to do? I like to draw! And color, coloring’s fun! And you tell Caspian that coloring is not for babies, his stupid rock collection is for babies!"

"Adults color in coloring books too? Ha! I knew it! I knew it wasn’t stupid!"

"Is Caspian bullying me? Oh no, he’s my house brother, and we do all kinds of things together. We just butt heads sometimes, you know? But that’s okay, all friends are like that, even if they're brudders. An' I know he and my friends Lyra, Nocturne, Caireann, and Corwin have got my back when I need it. Just like I’ve got theirs! And then there’s Koa, he’s awesome! He’s a king and he lives waaaaaay far away but I visit him all the time!"

"An', an', an', I got to do the Feast this time! And go to the gala! Mister Bel took me, 'cause miss Zinnia said she don't like parties, which was funny 'cause mister Bel had fun too, even though he pretended he didn't. So I got to go to a party, and get stuffed full of sugar and candy and cake and all sorts of nice things this month! It's super awesome, even though miss Zinnia said I was eatin' so much I might a'splode!"

Azalar giggles at the idea.

"But the best part was that I even got to do an auction! By myself! It was super duper cool! When I was eating stuff I was goin' through a pickle jar, an' I got my paw stuck and that sucked cause miss Zinnia had to break it to get my paw out and that was kinda scary. But! I found a lil pet pickle in it! And got to auction her off for cakes and stuff! It was super yummy!"

Azalar beams at you, before his joyful expression turns to one of alarm.

"Oh! Sorry but miss Zinnia was making Baked Furlskas and her Furlskas are the best and I don’t want her and Caspian and Lyra and the twins to eat them all without me! Bye!"

And with that, the little wickerbeast charges into the house, leaving you alone outside. You’re sure he’ll learn what the delicious Tiger Eye Peak treat is actually called eventually.