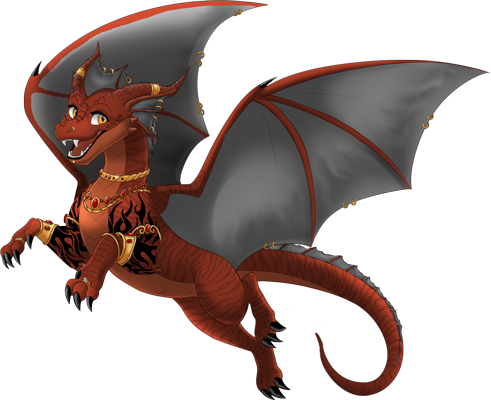 MalixenMiirym is infected with Vampirism. Symptoms include craving blood, sensitivity to sunlight, an allergy to garlic, and changing into a bat after especially forceful sneezes. If they start to sparkle, immediately consume a Golden Apple to cure the infection.

Paintie by me on the feral costume base

:'Hey get back here, I'm not done smiting you yet!'
~Malixen

Personality: Malixen is large, powerful and intimidating as all get out. She uses her overbearing personality against evil and (ironically) those who would oppress those weaker then them. She is a paladin, often heading out to chase down the monsters harassing innocents, such as giants attacking a caravan. Typically this winds up scaring off the people she was also trying to protect.
She's snarky and borderline sarcastic at times and is a little rough around the edges but has a heart of gold.

Like nearly all red dragons she is fond of gold and doesn't part with it easily, but unlike most red dragons will still begrudgingly give up her gold and treasure to those in need... although such charity comes with growling reminders that they had 'better' make sure to use the gold for something they need and not spend it frivolously.

Being a paladin of Boldrei, the goddess of the hearth and family, and raising her own hatchling siblings since she was a juvenile, Malixen is oddly a 'family person' and very motherly around the young. She loves children and dotes on them, oddly adoring it when they get brave enough to want to play games of 'knight and dragon' with her - chasing her around with wooden swords - or using her back and tail as a slide for fun.

Malixen can take on a human form (a thickly red haired woman with a rather huge behind), and wears little more then what would be a gold coin chainmail bikini in that form. She doesn't like clothing, finding it odd that humans are so obsessed with covering themselves for modesty instead of for keeping warm.

Dislikes: evil, infidelity, anybody who would harm a child, the cold, having to wear covering clothing, spicy foods (spicy does not mean it's actually 'hot'!)