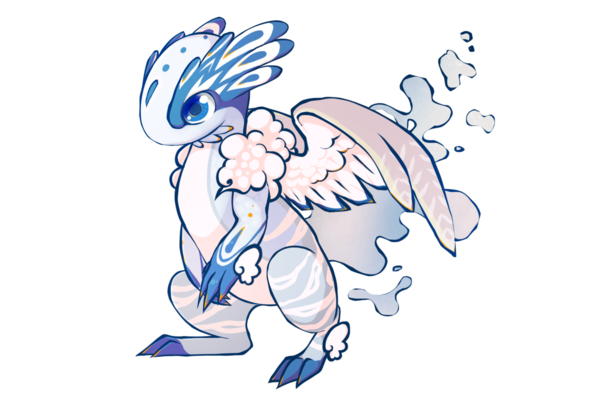 They are among the clouds, leaping and bounding with youthful energy. The sun’s rays are warm, and are welcoming; against the chill of the wind, the dusting of droplets as they dip into the clouds’ mists.

This white, fragmented palace within the sky is the only one they’d call home. It’s ever-shifting, waning and growing, but soars high over the lively world below—and that means they’re never in one place for long. It’s wonderful, to see the breadth of the world from this high place, though they haven’t the need to look down to experience change.

While for the most part, the clouds they follow are fluffy; the kinds that creatures below look up at and make pictures of. They are full of light and shadow, but never are they grim. For even in the shade, there is warmth, there is form. It’s more of a resting place, as it holds the same tranquility as a lake in winter, the serenity of a sunlit forest glade. The shadows here are a rich periwinkle, never truly blue enough to compare to the sky, but they like to think these patches hold some of the color that will grow at dusk and dawn—after all, the sky is so vast, and does so much, that the clouds must do some work to make sure it all holds together just right. The sky has to be so blue during the day, and so shimmering at night, that the fleeting moments where the sun and moon trade places can’t all be held within the sky too! So there comes the cloud’s duty; stained white, untouched, they are the perfect vessel to hold the colors that will flourish at such times, to help bear the sky’s burden. Dawn and dusk are yet another moment when their sky palace shifts; not so much in structure, but in its beauty. They’ve not quite found out the trick to dyeing the clouds a desired color, but they find so much more joy in how their pelt, too, shifts during the approach of the moon, in the dying of the sun. Most importantly though, these are still when the clouds are at peace.

There is an unnatural light that will scar the clouds, accompanied by a terrible snarl. The shadows deepen, and the air grows thick with coiling layers of vapor, obscuring them from the sun, the sky. The hiss below is constant as rain, sleet, or snow streaks down to the world. They know nothing of what happens to the earth, only that their home is now full of ominous figures as lightning flashes and the clouds continue to deepen. A calamity, and one that they know is brought by another—perhaps one of their own? They haven’t seen anything clearly during these times—no, not with the thick fog that brings cold tears to their eyes and ice to make their wings clumsy. To struggle through these times is always a challenge, and never the same. To blunder through the tunnels of racing wind which carve fleeting passageways, to dip and duck around the patches of building electrical energy, gasping for a breath of fresh air, unladen by the raging vapors, is never an ordeal that they will find easy to outlast.

It’s a dangerous time, but it always passes. Perhaps they climb their way to the surface, to the sky; or perhaps the clouds exhaust their rage, the one who brought the terror in has moved on. It leaves their patch of clouds decimated, usually; no longer do they tower and wind into unique shapes, but are stretched wide, as if a giant paw had come down to flatten them into stretching plains. And then their task begins; to craft their palace once more, to gather the clouds from the shattering, and to coax them back into the calmed breeze and continue their flight.

And so it goes; so it has always been. Perhaps one day they will meet another; they wonder at the night sky so often, entranced by the designs of the stars, and are sure it holds life somewhere, too. Maybe another of them pulls the stars into place, and or ferries each star across the sky, to make sure the sun won’t burn them, or the moon.

Maybe one day they will dive low and greet the landbound creatures, or leave the sanctuary of their clouds to at last speak to the others who fly by, far below them.

There may come a time when they’ll confront the grim spectre who brings the nightmare to their clouds.