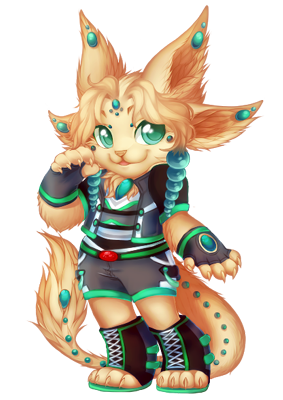 A bouncy and fearless gembound, Mahjong is almost always smiling. She can communicate with familiars, and absolutely loves to make friends. She really enjoys nature and being outdoors, especially the beach.

She is an Experiment from a project known as CellVation, where DNA is fused with items to grant the fused one powers. There are two types: Experiments, who are born through science alone, and Determinants, who were born like normal beings but altered later on.

Mahjong is created from a blue-green marble, allowing her the power to manipulate glass and similar materials. She can create marbles as a weapon, either projectile or something similar to a whip. The marbles she has are a part of her fur and hair.

For whatever reason, she is also able to read minds when in contact with someone, and predict the future in occasional bursts.