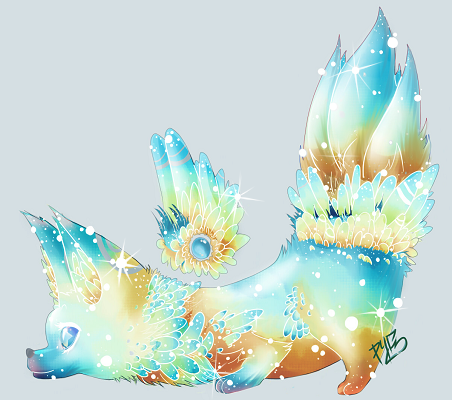 Zeppar no longer has a house! They will be unable to work. Please replace the house or move Zeppar into a FC slot.

Zeppar is infected with Vampirism. Symptoms include craving blood, sensitivity to sunlight, an allergy to garlic, and changing into a bat after especially forceful sneezes. If they start to sparkle, immediately consume a Golden Apple to cure the infection.

The Growlaxy is a mammal that is covered with both fur and feathers. It has a large tail that can open its tufts to mimic the flowers of its homeland, even having a beautiful gem in the center. This is a form of camouflage for safety.

The ‘breeds’ of the Growlaxies are based on what flower they are genetically designed to emulate.

The feathers around the creature’s neck and cheeks can be flared, much like the gills of an angry beta fish. This is to make them look more dominant to each other, as well as to impress a mate! Usually it just makes them more adorable though.

The Growlaxy species always has wings; however, they are too small for actual flight. The wings are only used to slow the speed of falling, and sometimes to glide, if the Growlaxy is strong enough.

Newborns:
When first born, the Growlaxy is very small with a large tail. It is born with its tail tufts folded backwards and encasing it, much like a seed or pod. Due to that, they are simply referred to as ‘Pods’ during that stage of life.

Reproduction:
They actually don't have genders in feral form. When they take human form they can choose a gender to take

They reproduce via pollen and seed pods in their fur