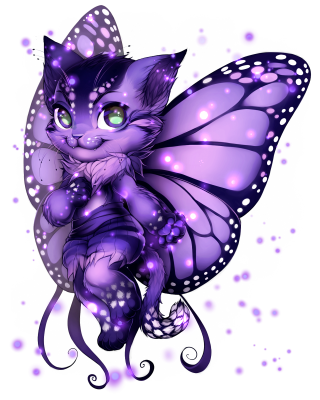 Ayla is infected with Zombipathy. Eating brains relieves symptoms for a time, but comes with memories of the brain's former life. Your doctor recommends adding hot sauce for extra flavor, but a Golden Apple a day will send the Zombipathy away.

Ayla is frustrating - her sweet and caring demeanor makes it hard to not forgive all her misgivings, such as her constant pranks. They are never meant as anything harmful, they just sometime get out of hand... Or most of the time. Thankfully, no one has ever been hurt because of her and even if things sometime look sour, somehow they end up surprisingly good.

She has a habit of being a bit of matchmaker and sometimes it backfired, but most of the time not. Ayla may or may not have had something to do with Laq and Xeil... Other than this hobby, she also loves to play with animals and helps Clemensa around her shop a lot.

Of course, the fairy has to get in trouble at least once a week, wandering somewhere too far into wilderness. Often, Naktion and Nayrem has to help her, though it is obvious she is quite capable of defending herself. In truth, she and the starry Saggitari go on adventures together, pulling grumpy cat along against his will. (Or he likes to seem like that.)

She also has a habit of using her fairy dust in all the wrong and right times, especially to disguise herself when she's delivering gifts. Her disguise is rather white and fluffy....

All in all, Ayla is like a sweet tornado, dashing through Quetzal and what she touches hardly remains the same, yet somehow is made better with her concealed wisdom grown through centuries of experience and observing others and the cycle of life.