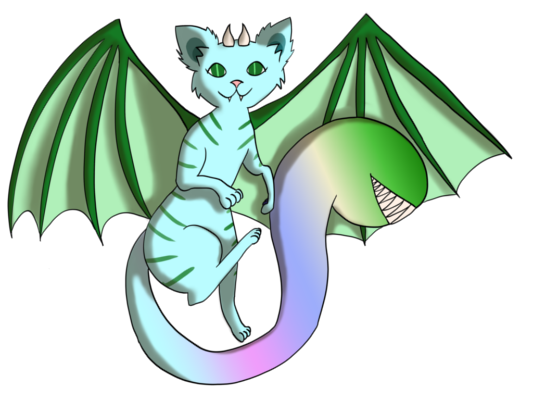 Misha is infected with Vampirism. Symptoms include craving blood, sensitivity to sunlight, an allergy to garlic, and changing into a bat after especially forceful sneezes. If they start to sparkle, immediately consume a Golden Apple to cure the infection. Peronality: Mischievous, prone to anger, loving only to a select few

Dislikes: Spiders, People who mess with her tail, loud noises

Other: Misha doesn't often speak. Her tail is sentient and has a mind of its own, and usually does the talking, mischief making.

Misha is a chimera of sorts, some call her a cat-demon, others a batty cat, still some a mouth-tail feline. Yet to her and her fellow cave dwelling friends, they are all the same species: Felkits. Living in caves far away from prying eyes, the Felkits are actually a friendly bunch--usually--but are often feared when spotted because of their slitted eyes, horned heads, toothy grinning tails. Those who want to make friends with others are often chased away or hunted down, much to their dismay, and so this has made a select few Felkits aggressive, such as Misha, who believe the outside world should simply be off-limits. Over the years, Misha has withdrawn into herself, talking less and less, instead smiling kindly to any she meets. She instead lets her sentient tail--who has an ever learning brain of its own--do the talking. Misha's tail is often cruel and unkind to those who meet this colorful Felkit, biting any strangers who come too close. This is not to be mean, however; it is actually a wall of defense Misha has built up unknowingly in her mind, as she wishes to protect her home and her fellow Felkits. Misha spends most of her time Exploring the boundaries of the Felkit territories surrounding the caves, but she does occassionally return home to gather supplies from the caves, tend to her mushroom gardens, and perhaps mine out a few gemstones before heading out on her next patrol. She is occassionally accompanied by her best friend Zillo--a red furred Felkit, who is kind to all and wishes to invite others into their caves--but she usually insists that he stay at the caves, where it is safe, although she finds that he listens less and less these days. Misha and her sly talking tail may seem like double-edged dagger ready to strike, but all this feline-demon wishes to do is protect her species from extinct.

Please Note: The Felkits Cave Official Page has become inactive as well as the thread here on Furvilla. I used some of the lore by Carmabella and wrote the rest of the story myself. This is not official Felkit lore!

Felkits are a closed species by Carmabella (ID# 88194) and Furaffinity. PM her on there to ask if you can still get one.

Thanks to her for hatching this Felkit for me!

Thanks to noll #12373 for helping me with the coding for the background! Image from pixabay.com