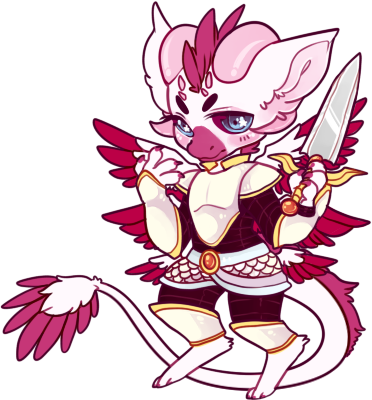 Valentine is infected with Vampirism. Symptoms include craving blood, sensitivity to sunlight, an allergy to garlic, and changing into a bat after especially forceful sneezes. If they start to sparkle, immediately consume a Golden Apple to cure the infection.


Valentine is a Dutch Angel Dragon spoken only of in myth, told and recorded only by the spoken word of those who know him first-hand.

Valentine is a brutal warrior, letting none who oppose him stand in his way. He is harsh and hateful-sounding, particularly to Dutch Angel Dragons (specifically, one Dutch Angel Dragon in particular) who allow remorse to guide their soul to the Abyss, but has a soft heart which is encased in a metal chestplate.

Personality-wise, Valentine prefers to keep things strictly to a formal setting. Rarely is he found in a playful or non-serious moodset; after all, he does have to keep up a profile as a warrior and leader! To most, he is loyal to only his career as a warrior, fighting purely because he has to and helping others out of necessity. To close friends and family (which is, sadly, few), he is loyal to them and them alone, doing whatever it takes to keep them safe and happy - even at the expense of his own life.