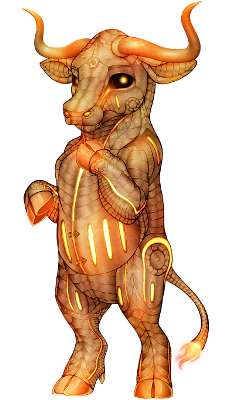 Arvalion is a Colchis Bull (aka Bronze Bull) from greek mythology, and has some features of the torture devices built under the same name. He has a furnace in his belly, which traditionally would have someone stuffed into it to be cooked to death-- but luckily Arvalion is a bit more gentle than that.

Arvalion is a master craftsman, He stokes his fires with a magical fire crystal to melt down precious metals that he may work with in his trade. He'll even bake things in his belly from time to time, though he's not so good with controlling the lower temperatures and is very good at burning things beyond edibility. Oh well.

When he's all fired up, His body gets very, very hot. His hooves leave smoldering marks on the ground wherever he walks, and his furnace vents out of his tail. Arvalion has to live in a stone house and be extremely careful whenever he's visiting someone living in a wooden one, less he burn it to the ground.

Arvalion stuck a cog to his forehead. He doesn't need it, but he wanted to get his money's worth out of that expensive steampunk costume he's wearing.

Here's his fullsize image because the resize absolutely destroyed his rivets.