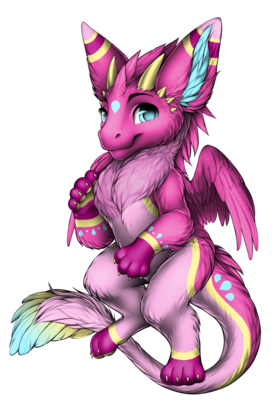 Cassie is infected with Vampirism. Symptoms include craving blood, sensitivity to sunlight, an allergy to garlic, and changing into a bat after especially forceful sneezes. If they start to sparkle, immediately consume a Golden Apple to cure the infection.

Relationship Status: Currently swooning over colorful rebel Dutchie Satellite and they are so hecking cute together (Satellite x Cassie Dutchie OTP)
It is nighttime, and you were taking a stroll along the edge of town, civilization on your left, a forest on your right. You were deciding on your next destination, when you heard the soft sound of singing. Intrigued, you followed it, heading into the forest. You came across a lake, but you weren't the only one there. Sitting on top of a rock, facing the water, was a dutch angel dragon. They were singing with a smile on their face, gazing upon a purple flower they held in their paws. They couldn't see you, and you stayed where you were. Finally, the dragon sighed and spoke, and you could tell from their tone that they thought no one was listening.

"Even when they want you to stay one way, it is always the best to follow your heart, isn't it?" the creature spoke softly.

Cassie started off as a female timber wolf, and spent a lot of time questioning their identity growing up. Once they were an adult, Cassie moved out and set off to find a new place to live. They met up with Rain who offered them a place in her village, and Cassie accepted. There Cassie met Fern, and the two instantly became friends. Fern wanted to help Cassie find out who she was, and brewed the canine a potion that turned her into a coyote. They briefly tried being genderfluid, but realized that this wasn't what they wanted either. Finally, Fern told Cassie about dutch angel dragons, a species that had no gender at all. And thus Cassie became a dutch angel dragon and finally discovered who they were. Because anatomy.

An Explorer at heart, Cassie loves traveling the lands and meeting new people. They will often go into caves or forests, and even abandoned places in search of a good adventure and loot. However, this often leads to them getting into trouble, and Cassie will usually have to rely on their travel buddy, Pacifica, to get out of whatever mess Cassie got into. Cassie is kind and soft-spoken, and prefers flight to fight. Even so, they will always try to make a good first impression through a smile and a wave. Probably.

Despite having wings, Cassie prefers to walk instead of fly, leading many to believe that she is flightless, despite this being untrue. She also loves colorful things, because she finds them pretty, and is quick to fall for rebels. Traditional art by me! Paintie by @Glaciarie !
All comments from Cassie will be in character unless stated otherwise!