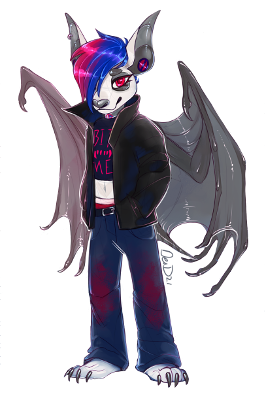 Dislikes:
Tangled headphone cords
Cold weather and having to wrap up warm
Certain types of authority figures
Mushrooms of any kind in any food

Personality Traits:
A local radio DJ, he lives and breathes music. He can play the keyboard and the synth pretty well, thanks to the reach of his long fingers and years of practice. Poor eyesight seems to have left him with really acute hearing, especially when it comes to pitch and tone. He is rather loud and rambunctious while on air, and it’s often hard to tell if it’s a radio persona or just how he actually is. While spontaneous, he can control himself when a situation asks for brevity, though he has a bad habit of cracking jokes when anxious which can get him into trouble.

Backstory:
Coming from a pretty average household with pretty average parents didn’t stop him from acting up in school. While nothing seriously dangerous in his repertoire, he liked to attract attention and get himself noticed. He ditched a few lessons, showed himself up in class, other students tended to either love him or find him really obnoxious. He had like 3 failed garage bands with various cycles of friends that never got beyond the driveway, though he will talk fondly about each one regardless. Music became a big influence in his life from a young age and he got an internship at the local radio station as soon as he could. He scrambled his way up to DJ - sure, it’s a late night segment with some odd listeners and poor pay, but he honestly couldn’t be happier. Plus he can get away with the occasional swear past 9pm.