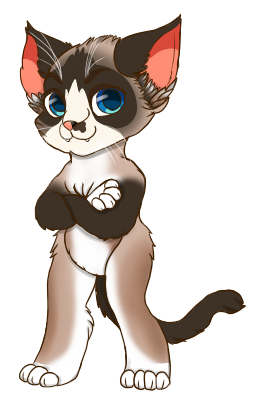 Starbug is infected with Zombipathy. Eating brains relieves symptoms for a time, but comes with memories of the brain's former life. Your doctor recommends adding hot sauce for extra flavor, but a Golden Apple a day will send the Zombipathy away.

Note: He tends to reply in character. If I'm replying out of character, I tend to put a parenthesis and OOC: before my comment and then another parenthesis at the end of my comment but sometimes I can forget to do so.

He has a toyhou.se where you can see all of his art! More info about him is also included there.

Nicknames: Starbuggy, Bugthug and StarThug. The first was a loving misspelling by his owner and the other two are from his owner's parents as they like to joke that he stole their 'hearts' with his loving gaze.

Name Meaning: Starbug is the name of the exploratory ship on the show Red Dwarf that first aired on 1988 to 1999 on the tv channel; BBC Two. The series has a current reboot called Red Dwarf XII which is being aired on the digital TV channel; Dave.

Health status: Deceased as of December 15th, due to his mass in his mouth and an secondary infection caused by it.♡❤♡❤ He's now my guardian angel cat watching me from heaven.❤ Due to his passing, from now on, any art that is ordered or commissioned will be of him with white heart shaped angel (aka feathery bird like) wings and a golden halo. He will get a fresh paintie as soon as I can afford it.

Species: Angel Cat, specifically a Snowshoe Siamese. (Can be drawn anthro or feral)

Personality: Starbug is a sweet, kind, caring and loving being, he cares deeply about his owner; Brionna, her parents; Heather and Brian as well as his friends and extended family members. He's very empathetic and often can sense if someone close to him is very sad or scared and will try to cheer them up in anyway that he can. Playful and loyal, he enjoys playing with others like his friends and fellow feline family members, but he especially loves playing with his owner, Bri.

Trustworthy, helpful, honest and protective, he won't let you down if you need his help. He tends to be honest and vocal about his opinons, often refusing let any strangers tell him what that he should believe in or he should what to do as he has his own moral code and his own view of the world. His human, Bri is the exception as he adores her and therefore he shares in her beliefs.

Kittens: Genetically none but has been fosterdad to many.

Friends (he considers them family):

Enemies: Anyone who means to do harm to his friends and family.
Bullies in general
Anyone or any creature who are arrogant and rude so they think that they are above the rules and don't have to be kind or polite.
Poachers or hunters who overhunt the animals of the forest.
Most spiders (mainly the venomous ones), cockroaches, centipedes and scorpions. (If any of those happen to be kind and anthromorphic in nature; they are fine by him!)
Venomous snakes (he only likes the non-venomous ones like cornsnakes cause his human likes them. However if he were to meet a kind anthromorphic venomous snake, he would gladly try to befriend them!)

Likes:
Naturally he misses his humans and adoptive family of cat friends who live back on Earth. However because Myst Grove is a magical forest realm on exists on a different plane of existence, it has portals to and from other worlds and realms and so; he can visit his family on Earth whenever he likes. Of course, his humans can't see him for the most part unless it's midnight aka the witching hour but they can always feel his presence there.

Art Credits: Anthro paintie made by stormbringer15 (*currently equipped)
His only paintie was a custom paintie raffle prize from the prize pool of a staff member appreciation raffle that was managed by Watersnake and ran by Dinoval . Thank you again so much Dinoval , stormbringer15 and Watersnake )

Future plans (notes for myself):