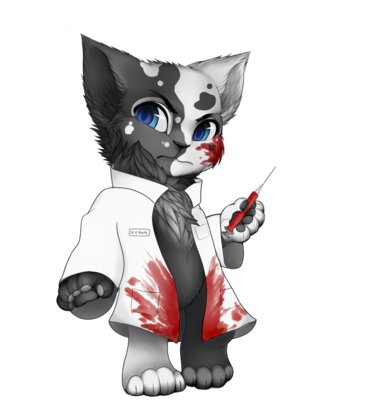 Viktor Mantle is infected with Zombipathy. Eating brains relieves symptoms for a time, but comes with memories of the brain's former life. Your doctor recommends adding hot sauce for extra flavor, but a Golden Apple a day will send the Zombipathy away.

The best doctor in all the land, even by his own modest admission

Viktor grew up in Dragonsmaw Manor, where he originally began and perfected his craft of brewing medicines and performing surgeries. He's particularly good at aiding badly wounded Warriors who had fallen on some bad luck battling the Manor's most dangerous monsters.

He's got the best home-brewed anaesthetic that knocks those large warriors out in a second.

Viktor met his husband, Lucius, by pure luck. The stubborn Lucius, who distrusts explorers with items needed for costumes, ventured out in the thick of Dragonmaw's forests in search of animal fangs and candycorn for one of his newest costumes. While his back was turned, a Horned Beast came behind him and struck him unexpectedly. Lucius was lucky that a warrior was nearby, or else he could have died. The warrior rushed Lucius to Viktor's apothecary, where he stayed for the next few days under Viktor's close care. The two of them only grew closer as time went by.

Viktor is a quiet cat who keeps mostly to himself unless prompted. He attends gala's that Lucius is invited to but rarely mingles among others, mainly sticking to his husband like glue or prowling the food tables. He's fiercely loyal to his husband and his very few friends. With his fierce loyalty also comes jealousy, he's gone so far as to threaten Lucius' models who seem to get too close...