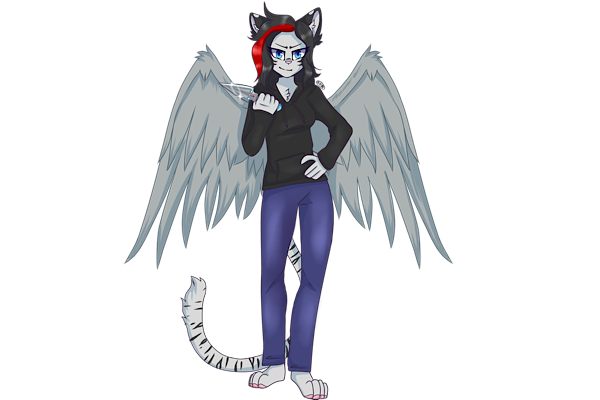 shadow is infected with Lycanthropy. Changes into a beastly monster after exposure to moonlight or especially frustrating board games. Howling at the moon relieves the symptoms for a little while, but use a Golden Apple for best results.

Nickname: tsuki
(moon in japanese)
(only delta is allowed to call her this)

relationship status: single but likes someone

she has white fur with black stripes a floofy tail and wolf-like ears, she wears a dark grey hoodie with a tank top underneath, and blue jeans, she has a scar running from her shoulder to her chest from her former job

her father was an assasin who thought that he was only killing the bad guys, once he found out they were innocent people, he decided he wanted to change how the organization was run, but one night when shadow was around 13 she decided to follow her father, unbeknownest to her that it was a fake mission and she whitnessed her father's murder, years later she trained at the academy and she too realized that these were innocent people. and was able to kill her boss and shut the organization down. she has since then settled down, she suffers from PTSD bacause of her father's death and her past job.

she is pretty laid back, but when angered she resorts to her assasin training, and may-or-may-not make you her dartboard. oh, and she still has all of her assasin stuff as well as tranq darts. so getting her really mad is basically a death wish

- having her daggers handy