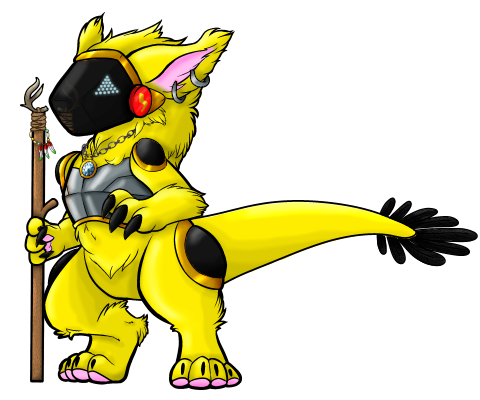 As you approach, a yellow protogen looks up from where she is refilling the food and water troughs in the stables in Tienyo’s land and water pasture while a few of the minipets crowd around her excitedly

"Where was I born? Quetzal Palace. Surprising, huh? Didn't expect a protogen to come from there, did you?"

"What do I eat? Oh no, I can open my mouth and such. The electronic screen on my face is actually a visor."

"Pretty surprising, right? But no, that’s for primagens. I have biological organs and so still need to eat."

"Primagens? Oh, they’re the finished product of what us protogens were meant to be - we’re the prototypes, you see. We’re about 40% artificial, more or less, with a fully functioning digestive track, natural organs, skeletal, and vascular systems. Primagens, on the other hand, are 70% artificial. They look more like dinosaurs than anything else, honestly. Anyway, we were created to explore the vastness of space. I guess in hindsight it shouldn’t be surprising that I come from Quetzal Palace. Huh."

"Hobbies? Well, I enjoy gaming; Anubis, Amun, Juniper, Imber, and I will get together once a week to play group games, and anyone’s free to drop in. The more the merrier, after all. Another thing I really like doing is weaving; Sanuye and I will just chill out in the sun making things and trading tips. Both of us were taught in entirely different ways, and it's really fun learning new tricks and things to make with Nocturne. She's learning how to weave from the both of us. I love playing Pokémon too, though you could probably tell by my name and screens."

Pikabolt gestures to the screens on her cheeks mimicking the signature red cheeks of a Pikachu, before laughing.

"I also really love animals. That's why I'm in Animal Husbandry actually; Tienyo's training me right now, and man, if anyone’s an animal whisperer it’s him. He can calm down a pissed off Lung Dragon in seconds. He says all it takes is practice, but I’m not exactly getting anywhere with that, at least not yet. I'm pretty good at hunting down escaped beta bugs though; they've got a pretty unique biological signature being what they are."

"Oh, I can sense electrical impulses, every living thing has them. Well, most of them, anyway. Like from your brain and nervous system, you know? Each species is unique, though there's some variation between individuals."

"Speaking of, there’s another Security Beta Bug escaping. Poor Tienyo, those little guys are the escape artists. I better go help him...I can see another pair of Internet Beta Bugs sneaking through the fencing there..."

Aside from the Pikachu theme, there’s actually two other Pokémon references in this paintie. Can you find them? I'll give you a hint; only one of them is on the paintie proper ^-^