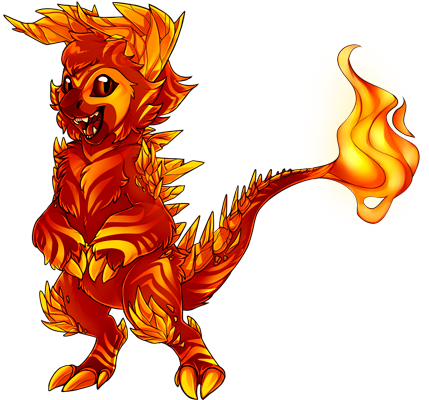 A proud ashfurn, Fleurri will often refer to herself as the "Lightning Queen". Not that she necessarily has lightning powers, but an uncanny ability to redirect energy--both in its purer forms, and when someone's just tryna throw a few punches her way. This allows for her to move with unparalleled elegance and speed when she wants, and makes a truly formidable opponent.

However, when she's not defending her title by fighting, she's loitering around and enjoying the feeling of being ruler over her own territory. She doesn't seem that knowledgeable, almost appearing as a pretty face with a few slick moves, but that's all part of a facade--the occasional intentional slips she gives out hint at her knowing far, far more than a normal mortal would say with such smug and impish confidence. But if nothing else she loves to tease!

Knows of Theo, and when she's not harassing Theo, the two of them are in some mischief together.

A friend of sorts for Atsuki, although he's in complete awe of her.


<Paintie & Species by @SimplySuburban , and the thread you could have found them is