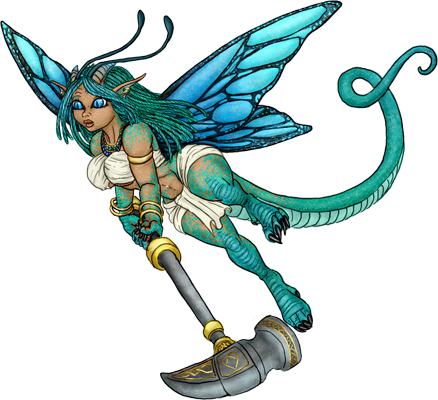 Paintie by me
(I created this picture back in '12, and it's been taken and used many times online without my permission. So if this looks familiar... I'm the original artist.)


"Hooray, trees and berries and butterflies! Wait... dwarves don't usually like those do they? Never mind then, I don't like them either."
~ Dalina

Personality: Dalina is a reluctant faerie. She has an interesting mixture of a stoic, honest, dependable dwarf and a chaotic, wild, playful faerie... and it conflicts poorly. When it comes down to it Dalina is a very loyal little half dragon with a love for history, tradition and nearly everything dwarvish, but she also is free-wheeling, careless and flighty. She tries hard to act more like her dwarven side but her faerie blood is too strong and keeps her acting in odd manners that she tries to stop when she notices herself 'going fey' and act more like a dwarf again.
She has worked hard to learn some traditional dwarvish female crafts, such as braiding, cooking and brewing, and hopes to someday find herself a decent dwarven husband. But finding a dwarf who can tolerate her chaotic faerie side and 'freakish' dragon cuteness is a feat in itself.

Her hammer is an artifact that destroys stone (and stone creatures). It's made for an average sized dwarf, so it's fairly large for Dalina.


Merits: Dalina is friendly, kind and playful. She tries hard to be helpful, sometimes trying 'too' hard. She's a very potent and powerful sorceress.

Flaws: She is far too chaotic, wild and unpredictable, even to herself. Her magic has a habit of going 'wrong' and causing problems.