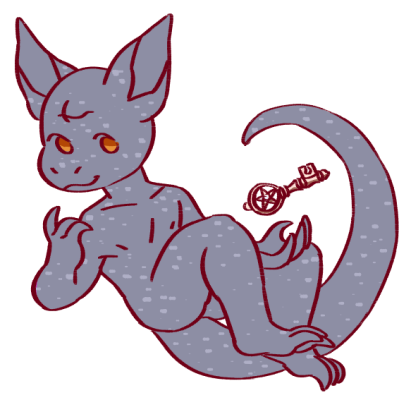 (click the image for more refs)
Illian is an incarnation of the moon. He has the ability to fly and also has some psychic powers, such as divination, telekinesis, and telepathy.

Features: He has a single eye on his forehead that is closed most of the time, rarely open. His single eye varies in color depending on what he is using his eye for. And his regular eyes are amber. He's mostly human-like in appearance. His face can be human shaped or have a snout like an animals. His ears atop his head are large and triangular. His fingers and toes end in sharp claws; he has no nails. His skin is a grey-blue color with light grey and white specks and he grows no hair at all. He has a tail that's almost as long as his body is.

Personality: He's solemn, he doesn't know how to express himself, he usually just keeps all his feelings inside; he's reflective, he likes to meditate and think about things that are important to him; and he's intuitive, he's very observant and knows what a person is like when he first meets them.