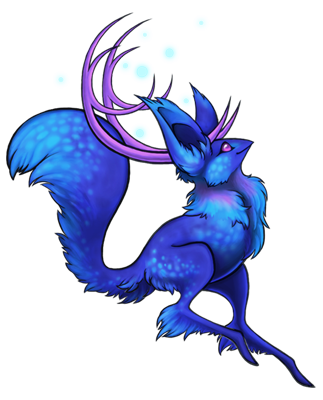 Celestipeeps are cute, rabbit-sized herbivores with a generally calm nature that makes them perfect for cuddling, but a curiosity that can lead to mischief and shenanigans! They have soft, peeping voices and are always followed by luminous orbs that dance around their delicate, curving antlers; though these orbs are magical in nature no one is sure what they're for--legends say they're manifestations of these creatures' souls.

These friendly, curious little herbivores are happy to come home with you and cuddle to your heart's content! The magical orbs that hover around them make for perfect nightlights, and with a number of variations and infinite color combinations, they are sure to fit in with any home. Lumi is a very energetic peep who is quite fond of running around and exploring for trinkets and treasures. When she finds something of interest, she'll stick by it, peeping and jumping up and down until it gets picked up by Andy or one of the other villagers who happens to be nearby. She also has an extremely outgoing personality and isn't shy about approaching a Villager she's unfamiliar with. Andy worries about her at times, thinking she might eventually get scooped up and carried off, but things have worked out so far. He finds it hard to keep up with her, though, due to his bad knees, so he constantly has to call out to her to prevent her from running off too far.

Even more than exploring, Lumi loves to be hugged, snuggled, and petted. Her glowing speckled fur is very soft and smooth to the touch, hugging her feels like hugging a warm, fluffy cloud with a very rapid heartbeat. She's mindful of her antlers and tries hard not to let their sharp points poke anybody, but sometimes in her excitement, they can get snagged in bushes or certain types of fur and fabric.

Along with peeping loudly and running around in a hasty fashion, Lumi's also pretty good at sensing the feelings and emotions of others and doesn't like to see anyone feeling down. If she senses that someone's upset or having a rough day, she'll snuggle the everloving heck out of them until they cheer up.

[May 4th, 2017]
Thanks to Andy's determination, Lumi finally has her Blue Chirp after 288 breeding attempts. She is delighted!