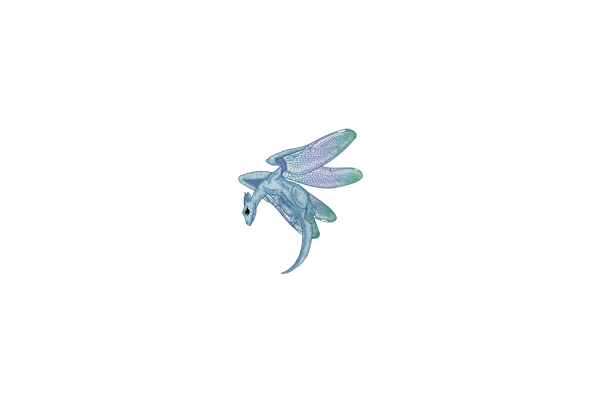 Dragon-Flies were once of a great dragon lineage, but that bloodline has been diluted over the ages. Most of dragon heritage is lost, their last decedents nothing but dragonfly insects. A few, however, are something more.

Dragon-Flies can tap into their draconic heritage by feeding upon the power of a Ley-Line, the mystical energy pathways that connect important places and things. Where a Ley-Line runs strong a Dragon-Fly can feed upon the energy.

When a Dragon-Fly feeds it takes on more draconic features and can even grow in size. They still stay small, the largest might rival a sparrow in size, but they are impressive still. And a Dragon-Fly that has recently fed can expend some of that energy in a 'breath weapon' attack. This is most often little more than a static shock, though it can range up to an electric charge or even a small lightning bolt if the Dragon-Fly is willing to spend that much energy.

Dragon-Flies who have not eaten recently revert to dragonfly appearance and intelligence so they rarely travel far from the Ley-Lines that give them their energy. Of course, the Ley-Lines traverse the globe so they can be found almost anywhere in the world, but tend to cluster around ancient sites of power.