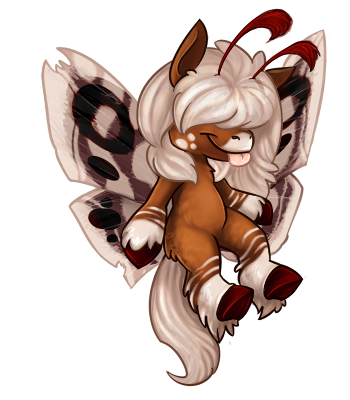 Veutara is infected with Zombipathy. Eating brains relieves symptoms for a time, but comes with memories of the brain's former life. Your doctor recommends adding hot sauce for extra flavor, but a Golden Apple a day will send the Zombipathy away.

awesome buddy gave veu her costume \^w^/ paintie by me

A smol and floofy horse moth who was adopted by wild dogs after initially being mistaken for an abandoned puppy.

Barks alot. may have fleas, careful when petting. Very much like yellow flowers.

Most people use the she/her pronouns for Veu but...honestly nobody really knows for sure.. Veutara doesnt understand gender....Or much of anything really outside of hunting and barking. The dogs she grew up with weren't exactly civilized furries so she has alot to learn if she plans to live in the village.